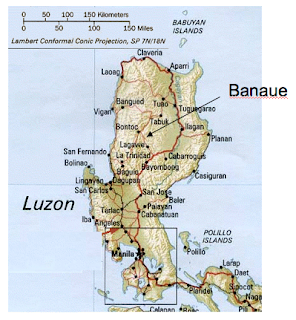 Having boarded a 6 a.m. flight in Guam, we arrived 3 1/2 hours later in Manila at 7:30 a.m., and headed straight north by car toward Banaue, to see the beautiful Ifugao rice terraces (acclaimed UNESCO historical site since 1995). The drive, as it turned out, was 10 hours long on the nose, if a little long in the teeth. En route, we visited the city of Cabanatuan, site of several POW camps in WWII, including Cabanatuan Prison Camp #2 in which my grandfather was imprisoned for a little over 2 years (1942-1944). Nothing is left of the camp sites which were actually located 5 miles east of Cabanatuan at Pangatian, so we pressed on. A roadside lunch of fish and chicken tamarind tided us over. The drive was diverting for the perpetual overtaking of overloaded jeepneys, motorcycles and 10-to-a-tricycles, zigzagging between uniformly sized dogs, thin chickens, pedestrians and kids all ages able to walk. It was not uncommon to find young kids (6-7 years old) carrying infants on their backs. Since all the homes (and businesses) line the road, the road was the children’s principal, if perilous, playground. Other sites included the drying of rice in one of the lanes (to make the two-way road a single lane), cows, carabao (local buffalo), goats and, of course, oncoming traffic.
We arrived at Banaue at 6 p.m. and, installed ourselves at the government-run Banaue Hotel, ate at the hotel restaurant which was a mistake. The buffet of chicken wings, fish sticks and spring rolls was classified as hot, but the only true part of H0T was the o as in zero, which is shared with C0LD. The canned fruit salad rounded off the meal. Next, we scurried off to reserve our seats for the hotel’s Cultural Show, a demonstration of the local dress, music and dances. The 40-minute show was performed by mostly Elders (as pictured below). Despite one dynamic younger male dancer, the tinny drum and rustic flute (seemingly improvised) music chased us out. A suggestion might have been to present a younger, more attractive set of dancers. 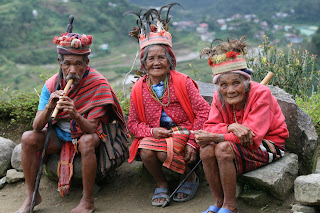 Another worthy side note for the Banaue Hotel were the “House Rules” announced in the room’s pamphlet. Neither visitors nor gambling are allowed in the rooms. Likewise there was a prohibition of cooking, ironing or hanging of wet clothes. Favourite rule: “Please inquire/arrange with Front Office for hotel items you may want for souvenir.” On the good news, the hotel had comfortable beds. However, on balance, it reminded us of communist style hotels. Zero charm, dour (if low consumption) lighting and minimal amenities. 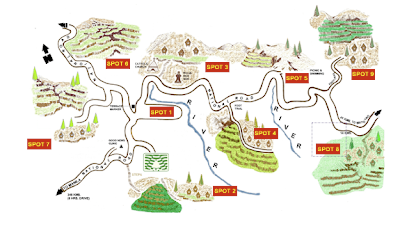 The following morning, awoken by an array of roosters at the crack of dawn, we were met by the appropriately named Dawna, daughter of the notable Hangdaan family in Banga-an village (3300ft ASL), an hour’s drive from Banaue (SPOT 8 in the map above). The drive was scenic, if bumpy. The road is under improvement; the widening and paving project is as yet 1/8th complete after eight years. That would place termination around 2064. The surrounding rainforest was filled with small waterfalls, lush with greenery, if denuded of any wild animals. The last of the monkeys apparently disappeared some ten years ago. 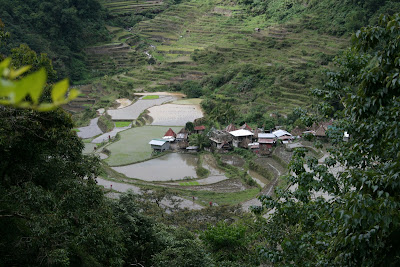 While we had been systematically warned of the “freezing” conditions at Banaue — it being 3000+ft above sea level — we were more than amply prepared for the 14•C temperatures. The lack of a sunny day did little for the photography of the rice terraces. However, the sun’s appearance when it appeared was always welcome in the mountains (see below this shot at dawn). 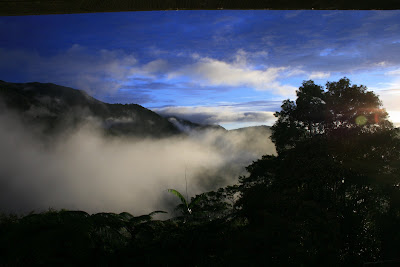 Once at Banga-an, we were challenged to a 1000-step descent to the lower village, in the midst of a vast array of rice paddies. We were welcomed with heart-warming generosity by mother of nine, Mrs Hangdaan, married at 14-years-old to her husband, a year older. We ate native rice and chicken prepared in their traditional nipa hut. We also were served a bottle of native rice wine and were caringly given a bottle of the juice to take back with us. The kids were adorned with prince and princess regalia to cap off a memorable visit. On the way back up to the main road, we witnessed the celebratory, if noisy, slaughter of a large pig for a one-week-old baby girl. The entire village was on hand to observe and feast — an event that lasted the better part of the day.
After a return drive through the same winding pass, we also hit the famed Viewpoint (SPOT 6 on the map above, 4000ft ASL), obscured in part by an afternoon fog. Our evening activity was dinner at Las Vegas (+63 (0)918-4409932), with a gracious and energetic host, Leopoldo Bustamante, better than average food and a miked stage for musically inclined guests. Unabashed, the Dials took to the spotlight like dogs to the doghouse. Oscar played his repertoire of tunes on the guitar and Alexandra accompanied me on a robust version of “Champs Elysées.”
We returned to the Banaue Hotel to find it swarming with police and military personnel. The hubbub was to prepare the surprise visit the following day of President Macapagal-Arroyo. The last time a President had come to Banaue was 2005. For her arrival, we benefitted from a tight security and tidied lobby. Since we were busy for our lunch, we declined the invitation and headed off to our next destination: Bolinao off Lingayen Bay. As it turned out, meanwhile, the President cancelled her trip — perhaps offended by our early departure.