Aside from the feast of interesting people, fascinating material and the discovery of new technology trends from around the world that you can find at the Netexplo Forum, I came across a nifty app that brings a whole new type of discovery to a conference. It is called BlueNod.  It essentially maps and visualizes a Twitter profile, community or hashtag and allows you to see instantly Twitter influence.  In the case of the Netexplo Forum, I used it at several times throughout the event and found the experience rather enjoyable as a way of seeing what was being tweeted, by whom and with what amplification.  During the two days, BlueNod tabulated 5000 tweets (hashtag #Netexplo).  You can check out the Netexplo event in BlueNod yourself here.  Note that BlueNod is still under beta development (you need to ask for an invitation to have full access).

The BlueNod system allows you to see — at different intervals — who has the biggest influence, who has neighboring communities as well as follow the tweets and view (easily) the profiles of individuals.  When you log in, you can also see who you are following (green dots) or not (blue).  According to BlueNod’s site, here is what the service promises:

I think this kind of tool can provide a promising new way to “curate” the twitter universe and quickly get to the heart of an issue or follow the core of a conference.  I was quite fascinated by the “influence” circles.  My only caveat with BlueNod so far is that the size of the circle is designated to gauge the influence of that Tweeter.  It seems that the influence is measured in function of the number of retweets during a specific event or on a specific hashtag.  If you double check against Klout or Kred, for example, you can find a fair amount of discrepancy between the latent influence and the realtime influence in that singular moment/event.  That said, having influence measurement for a specific issue, event can be very useful, too.

Since it’s hot news, you check out a snapshot BlueNod mapping of the hashtag #oscars. 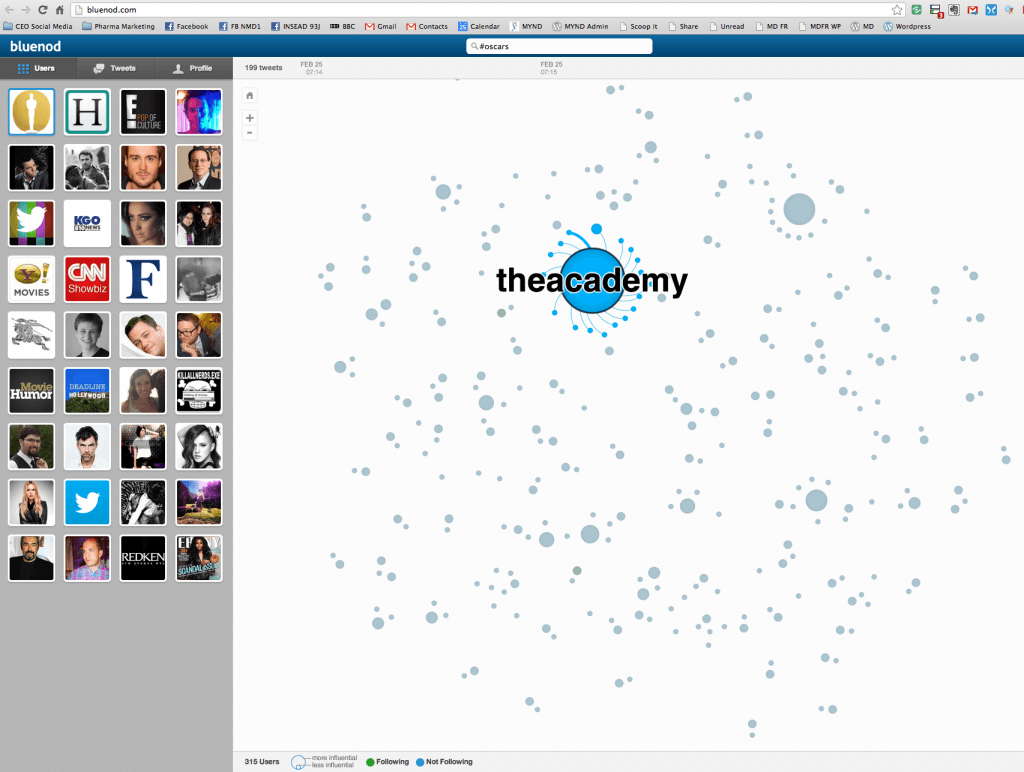 Not surprisingly, taking a mere 200 tweets (and 315 users including the retweeters) with #oscars in it over the course of a minute this morning (7:14am), you will see that @TheAcademy had top influence and radiance.  On the left you can see who among these 200 tweets had the biggest influence over that time span.  I note, with not a little pride, that my gang at Redken 5th Ave snuck in (kudos!).  On the mapping, among other things I could quickly see, I had two people I follow… And by clicking on the Tweets tab, I got a quick scan of what was captured by BlueNod.  A great way to “plunge” into Hollywood’s biggest night.

Are you a taker?  Give it a spin and tell me what you think!