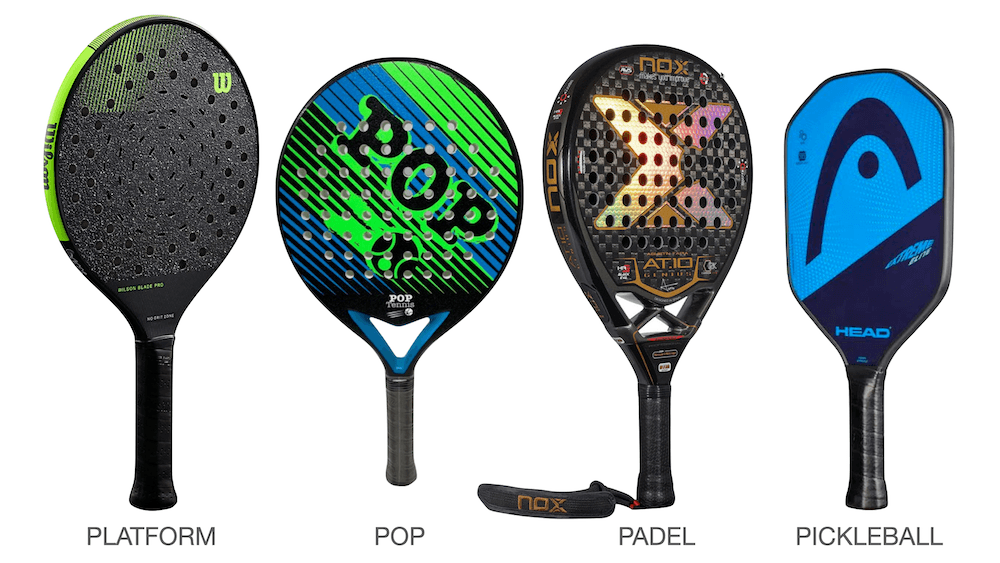 Last week, I read how Pickleball is “the fastest growing sport” in the US, where nearly 5 million people now play it [source NYT]. Having been brought up in Europe, as a kid, I always had the impression that sports in the US were going to be different, if not specific. There’s American football, the World Series of baseball (only between North American teams), and the global game of football has its own name in the US (i.e. soccer). When it comes to racquet sports, there’s always been a tendency to do things differently, too. Specifically, for the longest time (during my university playing career), squash was “hardball” in the US versus softball everywhere else. That’s since been aligned around the international version. In the US, alongside racketball (think: squash on speed), there are several types of mini- or paddle tennis that are basically unique to the Americans as well. Per the current trend noted above, I have seen that pickleball has even started to show up in a few clubs over here in Europe. Meanwhile, I continue to hear how padel tennis (my favorite and different from the aforementioned ‘paddle’ tennis) is one of the fastest growing sport in the world, now with over 25 million players worldwide, a figure which has doubled in the last 5 years [Source: FIP].

In light of the growing newsworthiness of these sports, I thought I’d dig in and check out the history of the various “paddle” sports (with a focus on four of them) and dig in on some of the numbers:

One thing seems clear: the pandemic was a boon for both padel and pickleball as they are easy to learn and easier on the body than lawn tennis (ie the game played by Bjorn Borg, Roger Federer and Serena Williams). Since the playing surface is reasonably small in each of these sports, and most are played as doubles, the players are in close proximity making it more easily a social event. Other commonalities include the fact that the serve is effectively neutralized and each of the games is easier for younger and older players (than both squash or regular lawn tennis) since you strike the ball with a racket that doesn’t have a long handle, the courts are smaller and the net lower.

Here’s a summary table of the differences of these four paddle/racquet games…. with the oldest game to the left and the youngest to the right.

We might call POP Tennis the granddaddy of paddle. Previously referred to as just Paddle Tennis, and later on as California Paddle, POP tennis is the oldest game of the four here. At its peak, POP tennis was played in more than 500 US cities. It then had a big dip in popularity, becoming essentially a game played mostly in California. Aside from losing clubs’ attention, there was also disagreement between West and East coast versions of the game (notably around the serve). Over the last few years, however, the game has found new favor and is growing well. According to Mitch Kutner, president of the IPTF, “Right now, California accounts for maybe 1% of all POP players nationally/Internationally. The largest majority of POP players are in the states of Florida and Arizona.” Importantly, in 2015, the sport was unified and rebranded under the name of POP. The following year, in order to fit more easily into existing lawn tennis courts, the POP60 court (i.e. POP 60 feet long, see below) was made an alternative official size per the USTA, compared to the smaller original POP Classic court (50′) that measures 50’x20′ (or 15.2mx6.1m). There’s also a smaller POP36 (36 feet) format, using a far more deflated ball, that is perfect for young beginners. These adjustments of court size are strategic as they allow POP to easily slip onto lawn tennis courts (see how they stack up in the image below).

Whereas I thought the name POP was an onomatopoeia, it’s actually short for popular, as in pop culture. It’s most popular in Southern California. Michael Schwartz, a bona fide POP pro, wrote to me that the 11 Venice Beach courts are known as the “‘Mecca of Paddle (POP) Tennis’ and most of the world’s top players can be found playing there regularly since the 1960s when the first three Venice Beach courts were built.” According to the official POP site, there are a total of 30,000 pop courts at over 2,500 locations (the majority of which are POP60) with over a million players. According to Kutner, though, the classic 50′ court remains the real standard. In addition to many private courts and around 900 combo pickleball/pop courts, there are “at least a few thousand 50’ dedicated courts.”

I personally had the chance to play POP tennis once in Pacific Palisades (CA) where I had a good run around with the local pro (thanks Michael!). I can say that I felt quickly comfortable thanks to my familiarity with lawn tennis (tactics and the ball) and platform/padel (the racquet). POP is surely a good way to get introduced to lawn tennis. Since you can add a POP60 without any major changes to a lawn tennis court or otherwise fit 2.5 POP courts in the space taken up by a full-size lawn tennis court, it offers a decent way to get more revenues per square footage for club owners. POP tennis certainly has seen a string of big tennis stars try it out, including Venus Williams, Maria Sharapova, John McEnroe and the dominant Dœrner brothers. Find a POP tennis court near you! Here’s a great article on the state of advancement of POP tennis (via Racquet Sports Industry Feb 2022).

With due credit to the existence of POP Tennis, Platform Tennis (also commonly referred to as Paddle Tennis) is a sport that is played on an elevated surface, originally because of the poor terrain underneath. When I was at university and in the earlier years of my career, based in NYC, I typically played platform tennis in the colder months up in Connecticut, with a hot toddy never far afield. It was pretty typical to be dressed up with thick sweaters and even gloves. With about a 1,000 courts in the world, it’s more of an esoteric game. However, it certainly can be a fun family activity during the winter.

While the platform tennis court itself has the look of a mini tennis court and it uses ‘walls’ in the form of a taut chicken wire, this game has plenty of its quirks and techniques. Notably, it requires plenty of patience. With a thin paddle and because the ball is dense (albeit with the same weight as a lawn tennis ball), you can ill afford to mishit the ball. With a large perimeter on the floor being out of bounds, the “in” surface is considerably smaller (6x7m) than in padel (10x20m). Like in padel tennis with the surrounding walls, play is almost continuous since you rarely have to stray far to pick up the ball (except for the occasional bounce out). Find locations for platform tennis.

As mentioned at the top of this article, Pickleball is all the rage … in North America. Since the ball is lightweight and aerated (with 26 to 40 evenly spaced holes), it’s hard to win with force and there’s not much running to be done. Lots of the game is played with all four players glued up to the non-volley line/kitchen, where deftness, deceit and angles are key. I have only played pickleball once (with my brother-in-law) and I enjoyed the outing. The rules (for scoring) are a bit different and I initially struggled to get the right weighting for the shots. As you’ll note in the comparative spreadsheet above, I give pickleball a lower rating when it comes to physicality. On the other hand, it’s surely an accessible game for all types and ages. In the realm of extra anecdotes, on the coat-tails of pickleball, you can now play Spec tennis which would be a version of POP tennis but on a pickleball court. Find a pickleball court near you!

As loyal readers of my blog will know, this is my game. I have already written quite a lot about padel tennis. Here are the main reasons why I love padel so much:

If you live in Europe, you will be able to find padel courts with reasonable ease. It’s highly popular in Spain, Sweden, Italy, France and Portugal and is growing by leaps and bounds in lots of countries, including the UAE, Finland, Finland, Denmark and Belgium. Of course, it’s also big in Argentina and Mexico. Check out the International Federation of Padel for more information.

The four rules/principles by which to play…

As a reminder, here are the four rules (in order of importance) of padel:

I might suggest that these principles could easily apply to all sports!

Final word: What does Google say?

So, what’s the “truth” about which game is growing the fastest or is the most popular? As if anyone has the absolute truth! In the lack of any worldwide authority, I took a spin on Google Trends to check out popularity online. It provides the following result worldwide in the different search terms between pickleball, padel, pop tennis and platform tennis. Both pop and platform are generic words, so I had to add tennis. Meanwhile, padel is de facto about padel tennis.

I’ll let you draw your own conclusions. In any event, the pressure is on for padel to join the Olympics (maybe in 2028). The growth in these ‘paddle’ games signal an appetite for different sports. Their rise through the pandemic, continuing media coverage and the economic interest for investors and club owners attest to a positive future.

If you have any questions or corrections, please add them in the comments!