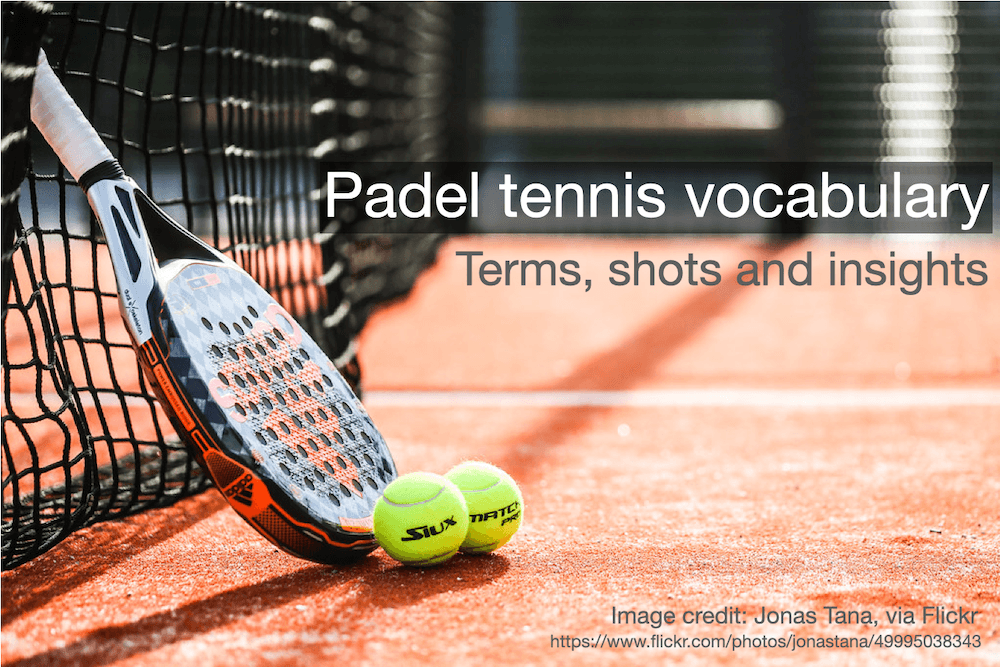 Some of you will be aware of my uber-keen love of padel tennis. Some, hopefully, will even have been bitten by the love of padel as well. If you’ve not heard of padel tennis and are interested in a game that is fun, energising and exciting to play, then you need to check it out! I suggest starting with my ‘introductory’ post on padel that covers the history of padel tennis and the state of play. A game that was invented in Mexico back in 1969, it’s now said to be the fastest growing sport in the world, with a chance to become an Olympic sport as early as 2028 (although it’s far from a shoo-in).

Part of the magic of padel (pá-del) tennis is that it is played with a Spanish flair, aka a smile on the face and/or with a sangria waiting in the shade. I consider myself reasonably fluent in Spanish, but padel has a language of its own. I have had great joy in learning the terms and subtleties of the game that, until now, is dominated by Spanish speakers (i.e. Spain and Argentina). Based on the current World Padel Tour (WPT) rankings, here’s a table that shows the geographic spread for the top 100 for the professional men and women (broken out for top 10, 11 to 20 and then 21 to 100):

If you’re wondering about the rankings in the other (competitive) tour, International Padel Federation (aka the FIP), the portrait is essentially the same. So, the bottom line is that professional padel is dominated by the Spanish. Moreover, most of the best foreign players train in Spain. No doubt, it will be interesting to see how the other countries develop, especially as the number of courts and players grow. I see France and Italy as having the best shot next in both the men’s and women’s tour, although there are more upcoming prospects on the women’s side from Portugal, the Netherlands, Sweden and Denmark. I wonder when will mixed doubles become a thing? Whatever the case maybe, one of the most important things you need to learn to do on the court is communicate with your partner. You may not need to use the Spanish vocabulary, but we should definitely all be doing more talking on court!

So, now for the vocabulary ‘lesson’ on padel tennis. First off, the word: padel. In Spanish, the accent is on the a: pádel. In English, when trying to say the Spanish word, we tend to put the accent on the second syllable. It’s worth noting that the “-el” (think: elle) is more pronounced than the way we say the end of word paddle (sounds more like “uhl”).

Below are some of the key words in Spanish (en español) that, in themselves, provide an insight into the specific shots, subtleties and differences of this gorgeous game. I’ve broken the vocabulary down into the different strokes, effects (on the ball) and locations on the court and added a key insight into each shot (from my point of view). I hope I’ve got them right. Please put corrections and additions in the comments!

I’m not going to list out all the strokes (such as a forehand drive or backhand volley, etc). I really want to isolate the shots that make padel more specific.

Focus on your overhead options:

One of the particularities of padel is that there are many different options to consider in your overhead. As the ball floats down, you must make a decision and execute. Unless you’re an advanced player, it’s best to make up your mind early and stick to it.

Here’s a really useful instructional video about the smash from Sandy Farquharson’s School of Padel, with the Finnish “master smasher” Saska Huttunen.

Some basic rules of thumb when playing padel

For anyone beginning or with an intermediate level at padel, here are some good rules of thumb to consider in your padel tactics:

Thanks to my trusted Spanish padel players for their help: namely Alvaro (based at NTC and coach of the GB women’s team), Rafa and Antonio (coaches at Chiswick Rocks Lane). Aside from all the resources mentioned above, including Sandy’s Padel School, here’s a plug for the two UK padel magazines, The Bandeja, run by Emma Kimber, and PadelPaper. If you’re looking for padel tennis equipment, here’s a plug for my friend and entrepreneur, Francisco, at The Padel Company.

As a bonus, check out the FIP Rise tournament (first ever in GB) with the competitive finals for the women, featuring Britain’s Tia Norton and Carla Fito Fernandez as well as the men’s Bram Meijer and Sten Richters v Bastien Blanque and Jose Jimenez. Both matches were commented by Sandy Farquharson, who provided all along a good deal of insights into the tactics of the game.