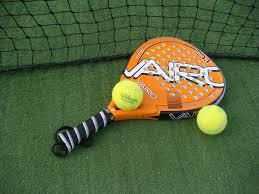 I have mentioned in the past my singularly most favourite sport is padel tennis — even if I don’t get many chances to play. The New York Times ran an article in late December 2008 on the topic of the alternative tennis games: Tennis spawns variations (thanks to my father for passing along) in which it refers to this wonderful game, padel tennis.

This game is quite different from the platform tennis you see in the US and that is often played in the middle of winter. Padel is generally played in the warmth of the sun with walls rather than fencing around the perimeter. If you have never seen padel tennis, don’t be alarmed. The game is quite geographically limited: principally Spain, Argentina and Mexico, and there are a few courts dotted around elsewhere; for example, in other Latin American countries and, that I know of personally, in the south of France and with one in the outskirts of Paris. From my online scouting, meanwhile, it would appear that the game is sprouting up elsewhere… There was apparently a World Championship tournament held in Calgary this past August 2008 with competitors from 15 countries: Argentina, Austria, Belgium, Brazil, Chile, France, Germany, Italy, Mexico, Paraguay, Portugal, Spain, Uruguay, USA and Canada. The site still says that the tournament is “coming” in August 2008… so apparently, the winner is as yet unannounced. There was even a blog from the UK about padel tennis (but it hasn’t been updated since 2006).

What makes padel tennis so enchanting?

There are four main reasons why I love this sport:

There is even a Federation of Padel Tennis… an important address for anyone who, like me who hopes one day to own a chateau, will want to install a padel court around the back.

A word of warning: don’t take any bets playing an Argentinian in padel… the apparent world’s number one (in the men’s) is an Argentine, albeit the ranking was stopped in 2006 — and on the women’s side, the top 10 is filled with Argentines too. Along with polo, the Argentines have tended to dominate padel (although, as the NY Times article suggests, the game is apparently in decline in Argentina). The Spanish currently dominate the men’s top 10.

For more information, here is wikipedia’s description of padel tennis. As a final aside: it is funny but virtually all the internet sites I found about padel tennis are no longer very active. All the sites seemed to have fizzled out oddly enough in 2006… I guess that means the community of padel tennis players is more interested in being offline (and on the court)!

Added in 2015 – an impressive highlight reel of the 2012 World Championships:

If you are a fan of padel tennis, let me know where you are!