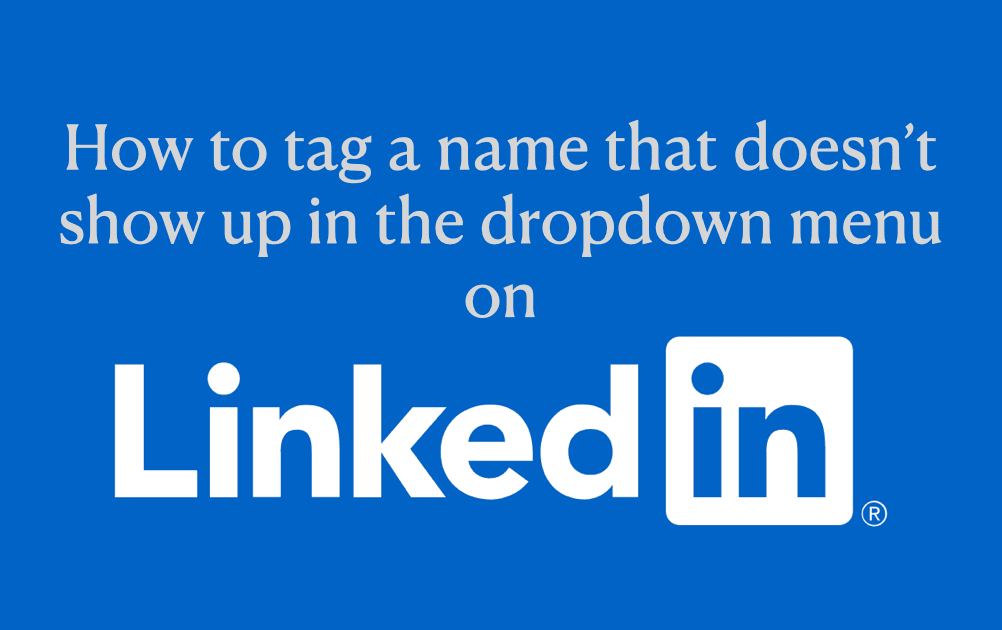 Have you ever tried to tag someone on LinkedIn and not find their name in the drop-down menu that appears automatically (if sometimes a bit slowly)? This is something that regularly bugged me, so I wanted to share the solution now that I know it.

The context: When you post an article on LinkedIn, you might wish to thank someone or call the post’s attention to someone in particular. This also goes for when you repost an article, share a photo, video or write in the comment field at the bottom of someone else’s post. Tagging or mentioning someone (or a company) is a way to help gain attention to your post and encourage some organic reach. N.B.Don’t expect miracles — it’s also important that the post be relevant and useful. Don’t spam people by endlessly tagging them.

The problem: If the person you’re tagging has an odd or rare name (ex: Minter Dial!), it’s usually not a problem. And know that the individual doesn’t need to be your 1st degree connection to appear in the dropdown menu. Both 2nd and 3rd degree connections can show up. However, if you’re wanting to tag someone called Jim Smith, the right person is far less likely to show up in the list of 10-12 names (which typically include companies).

How to tag that elusive name?

Here’s how to make sure the name you’re looking for will show up:

For example, you’re wanting to tag Jim Smith who’s an executive at a company called Keane. First, check on the spelling of his name. His name on the profile may be written “James Smith”, or could have an initial in between, “James E. Smith”.

Secondly, add in the most notable words in the subheading. E.g. @firstname lastname Keane. If that doesn’t work, continue to add in words that appear in the title (for example “Premier” or “Limited” or “CEO”). You’re then bound to find it! Unless…

Some names are hidden…

~ Caveat Emptor: Sometimes, the name of the person you’re looking for won’t ever show up. Other than possible misspellings or foibles of the algorithm, this can be because the individual has opted out. That’s done in your settings. If you’d like to stop others’ ability to mention/tag you, here’s how (source):

Other notes and options:

N.B. When you’ve tagged someone previously, the algorithm knows to populate your drop-down menu with that person henceforth with just the first and last name.

Also of note, the tagging feature is not available for articles published on the LinkedIn publishing platform. However, once you officially publish your article, you can mention or tag people in the update.

I hope you found this explanation useful!