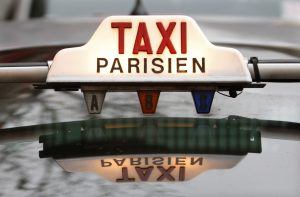 The top of a taxi is seen in downtown Paris January 29, 2008. Taxi drivers will stage on Wednesday a protest in the centres of France’s major cities. The National Taxi Owners Federation is fighting against a scheme to solve the country’s chronic shortage of taxis by the abolition of tight quotas and the authorisation of minicabs. REUTERS/Charles Platiau (FRANCE)

Can’t think of an industry that does less to please its clients than Parisian taxis. The list of challenges is long: bad attitudes, no responsibility (central authority metes out no punishment), cost, unavailability… The thing that got me so riled up this morning was the behavior of a taxi driver that I flagged down. He pulled over, but by the time I had walked over (10 meters), he waved me off saying that he was now “taken.” His “busy” light was indeed now on… and he just sat there without looking at me again. What happened is certainly nothing new in Paris. But the notion roiled me that he was just sitting there racking up a bill for some unknowing customer who had called in a reservation. He was just happy to avoid taking a random pickup (part of the job I say). And it galls me to see the large number of “busy” taxis you can find driving round and round the block, waiting for a pickup so that the meter reads the maximum amount allowable (if they follow the law that is). I am very much in favor of liberalizing the taxi business in France: buy back all the medallions and allow a free market approach (lower unemployment, greater competition… all those good things!). That said, they are doing their job of obliging people to take public transportation. Good for reducing pollution, although not all the stress. We still have metro lines that employ drivers that can still go on strike…