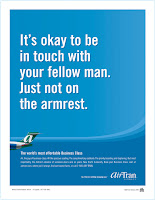 When I compare intra-Europe flying to continental US flying, the two major differences for me are that there are many more direct flights from city to city in Europe (no hub & spokes) and that it is harder to feel the (economic) pinch on European airlines. While flying from Paris to London is technically international, it would be quite normal to consider such a flight as “local.” But because of the international scope, perhaps, the 1 hour flight feels better than any one hour flight between New York and Boston, for example. I wrote recently about my transatlantic experience on Air France*, and there is surely a better notion of service there (vs US airlines). And, it is quite paradoxical that travel service should be so poor for US airlines — where travel is such a legitimately huge business.

Speaking of service, that said, there are many good ways to hear what is going on and what the consumer is experiencing [in the US]. From chat rooms to dedicated sites, there is more feedback than airlines can probably manage. Check “my3cents” which covers a wide array of industries as well as each airline. Then you have a dedicated space just to dump your complaints about air travel. So, the service of complaints/feedback is up and running. Clearly, the cost pinch and the poor financials have pushed the US airlines post 9/11 to cut back. On the other side, low-cost, budget airlines have been stealing business : the war of no frills versus no service. Meanwhile, ironically, Air France continues to hand out religiously its painfully long customer satisfaction survey on the long courier flights. Perhaps, that’s the secret to their success. I would argue that going virtual should, at least, accompany that on-board survey.

Now, I am not a big fan of “low cost” as a positioning, but you have to hand it to AirTran Airways (not sure they needed to repeat “air”) for making a more enjoyable advertising campaign. I appreciate the idea of posting all their ads on line (I also like the “enlarge type” functionality…thinking of those with diminishing eyesight). Makes sense. See AirTran’s ads. My personal favourite is the “Fired”. Between flying and looking at ads, better enjoy the ads.

Finally, if this blog weren’t timely enough, the Washington Post, wrote yesterday that the blogosphere is a great way for airlines to know what’s going on (as well as giving the power to bloggers to whine and moan…or give credit when credit is due). But, enough said about the competition between US and Europe. What about competing with China and the Chinese airlines for the international routes between US and China (courtesy of Reuters) or Europe and China? When you see who fills the ranks of the top 10 voted airlines, there’s room to believe the US and European airlines have a long way to go. Six out of 10 are Asian (2 from the Middle East, Qantas from Australia and BA from Europe).

* I found out that Air France was awarded a prize for best trans-Atlantic airline for the second year in a row. See the section on “accolades.”