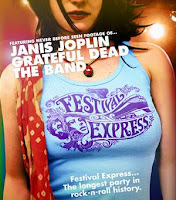 Without doubt, for lovers of 1960s music, Festival Express is one of the greatest newly revealed treasures of that era (although this event actually took place in the summer of 1970). The documentary film, which was released in 2004 (wikipedia link), is about a series of concerts, in the wake of Woodstock, that were produced across Canada within a 5-day period. The central component is the train voyage, nicknamed the million-dollar bash, that took the various entertainers from city to city, starting in Toronto and ending in Calgary. The entertainers numbered such greats as Janis Joplin, The Band, The Grateful Dead, Buddy Guy, Ian & Sylvia and the Flying Burrito Brothers. The real show was on the train as the musicians laced up and hooked up together on board before and after the concerts, which themselves were less than auspicious. Note that Traffic, Delaney & Bonnie and Eric Anderson performed at at least one of the shows, but don’t feature in the film.

And, our single most favorite television station in France (and the only one we watch), ARTE, which continues to have the most original programming and production, is airing this film… See write up in French.

For an interesting read on Ken Walker, one of the two men behind the Festival Express, check out this blog called ChittahChittah — as well as comments after the world premiere. According to Rotten Tomatoes, Festival Express was the second most critically acclaimed film in 2004.

If you haven’t seen it, do. If you’ve seen it, comment!