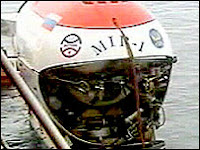 Recently, one might be able to detect in my posts a certain opposition to Putin. I must, however, note the brilliant coup of posting a flag below the Arctic (by the Mir 1 sub, pictured right) and the implicit proclamation of Russian sovereignty on the area. Taking all by surprise, including the Canadians and their PM Harper, this action shows the audacity of Putin. LCN of Quebec said that “this action, the second of its kind in a few months, aims to support the Russian claims on almost 1,2 million square kilometres of the Arctic which, according to certain estimates, would contain 10 billion tons in gas and oil reservoirs.” It remains funny nevertheless to think that in 2007, one could plant a flag to establish sovereignty, no?

It could be said that, followed by the attack camouflaged on Georgia (missile not exploded of August 7), Putin shows that he is a man with a mission of conquest on several fronts.

Watch it, I again want to say.