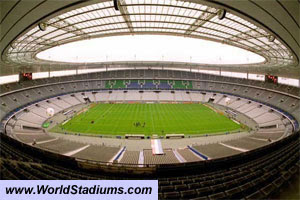 When I attended Friday’s opening rugby match of France versus Argentina at Stade de France (SDF), I must admit that I went sober and left even more sober. Well, since I had to drive home, that’s probably entirely normal. Except, I didn’t have a choice. That is to say, they don’t serve alcohol at the stadium. And I only figured that out after I purchased a round of what I thought was beer — no luck, it was alcohol-free. After 8+ years of attending professional sporting events in the US and Canada — most frequently watching the Flyers or the Habs — beer and booze, more generally, were an integral part of the experience and, surely, contributed to the ambiance.

In a sort of irony, smoking remained allowed at the game — which is no longer allowed at hockey rinks (indoor) in North America (nor probably in Europe, except I don’t go to hockey games here, so I don’t know). Often people smoke because they are drinking in a social environment. No drinking here at SDF…but I wouldn’t mind adding a new meaning to SDF: sans droit à fumer (no right to smoke). The SDF acronym in French also has the poor alternative meaning of “sans domicile fixe” meaning homeless. I can’t wait for restaurants SDF (the no smoking kind that is). And, fortunately, there are also kitchens for the homeless.

Anyway, while I was thrilled to have attended (thanks again Eric!), with the intimate 80,000 crowd and the lack of booze, the general ambiance at Stade de France was no way near the roar and excitement I was used to experiencing in “them good ole rugger days.” I remember well the pre-game buzz and the rowdy crowds at the Five [now Six] Nation matches at Cardiff, Twickenham, Parc des Princes… Not that I miss the car burning and thugs fighting, but there was a relative catatonia to the crowd on Friday. This sentiment was obviously compounded by the Argentine tackling that took leg and breath away. But, there was no ongoing animation to rouse the crowd either. I was nonplussed personally by the opening ceremony too. Have I gone too Americana? Oh, dear. But in the end, sports are entertainment [it is not really war, right?] and surely going to the match should have advantages to watching from the comfort of the vegetative chair.

p.s. if you’re looking for some entertainment at Stade de France, try this silly film.