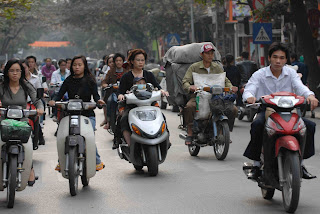 Visit to Hanoi Vietnam- Part 2 of a 3-part recount:

Hanoi is a thriving city, with approximately 5 million inhabitants said the two local guides (although the official statistics cite a much lower number). The architecture of the buildings is a mixture of French (windows, balconies), Chinese (inscriptions, colors) and Russian (Stalin era cheap) styles. The unifying feature is the narrow width of virtually all the houses, made with either a 3-meter or 5-meter wide berth to limit the taxation (see left photo). The houses vary from one storey to six stories, with many that have a base in the French style and the top that features Chinese traits. It seemed that virtually all of the houses are dual purpose with a shop on the ground floor and the shop owners’ dwellings either squared away at the back on the only ground floor, or upstairs. The rents in downtown Hanoi have moved up with the times, although still with government controlled pricing. On the tourist-haven Silk Road, rent for a typical thin shop on the ground floor is $4000USD. In the Viet Nam News of Dec 7, 2007, there was a piece on “Land Prices.” “The People’s Council carried a resolution that sets the price of land in the city in an effort to settle site-clearance difficulties and complaints of overcrowding.” Not sure how that works. “The resolution,” the article continues, “sets the price of city land at between VND2.5MM [108E] and 67.5MM [2934E] per square metre.” These price “controls” are effective Jan 1, 2008. I was also told by my guide that a 75m2 apartment located on the outskirts of the town costs $100,000.

At the same time as being a constant photo-taking opportunity, the hundreds of thousands of scooters and mopeds dominate the street experience. According to the HCM City People’s Council Deputy Chairman Nguyen Thanh Tai, there are 2000 new motorbikers (scooters) and 200 new cars registered each day. There is an evident lack of regard for the rules of the road, where bicycles and scooters drive nonchalantly up the wrong side of the road, like fish swimming upstream. The occasional policeman can be spotted pulling over a scooter; however, their citations are as effective for bringing order as throwing a pebble into a river is effective for creating a dam. I saw more scooters do double turns up into one-way traffic to avoid the cop than scooters actually getting stopped.

And, even if the maximum speed (anywhere) were to be above 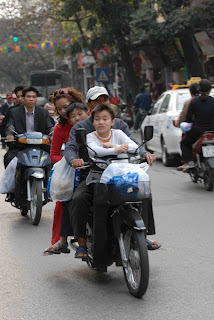 80 kmh, you rarely have the opportunity to drive quickly. With swarming scooters, bicycles and foot traffic, everyone drives at a certain pace. No quick moves. And a lot of tolerance, though, there was lots of (mostly futile) honking as well. The honking, that said, was mostly to remind someone to move over or that there was someone coming up from behind. I never saw any acts of aggression. Nonetheless, it is a hair-raising experience to drive in and around Hanoi. Overtaking on the main road (where you can reach the dizzying maximum speed of 80kmh) means honking and flashing like mad, pushing the slower vehicle toward the extra margin on the right and then forcing oncoming traffic over to the extra margin on the left, all the while juggling the cacophony of motorcycles and scooters. For the kids riding on the front of the scooters, it was like a Disneyland joy ride, except for the very real pollution and danger. Most of the kids I saw (that weren’t wearing a mask or helmet) were carrying a big grin throughout their ride (except for this one grimacing on the right–note the family of four; photo courtesy of Frederic).