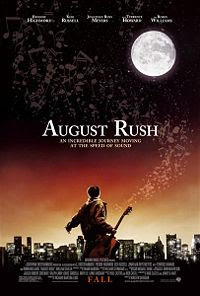 If you are a Stanley Jordan fan [as I am], you will undoubtedly enjoy the music of the 2007 film “August Rush”. Of course, most of us have a fibre that will appreciate the musical link between the various separated members of the family. As the last line of the film says, “…the music is all around us. All you have to do is listen.” (Reminds me of a Grateful Dead song: “When you get confused, listen to the music play…” (from Franklin’s Tower).

Among the more interesting roles is the less-than-perfect character of Maxwell “Wizard” Wallace, played by Robin Williams in a role that echoes the role of Fagin in Charles Dickens’ Oliver Twist.

It is cute film, that fuses the prodigal kid (at the Julliard School) with an Irish rocker (think The Commitments) along with a classical cellist. A fine little film (at least for a long flight) directed by Kristen Sheridan whose father, Jim Sheridan, did “My Left Foot.” The ending, I must add, is entirely predictable and soppy.

Main Actors other than Robin Williams: Freddie Highmore (Evan Taylor or August Rush) and Keri Russell (Lyle Novack, the mother), Jonathon Rhys Meyers (Louis Connelly, the father, who also performs two of the songs himself). Note that the special August Rush guitar playing was handled by Kaki King. The film was nominated for an Oscar in 2007 for Best Original Song.