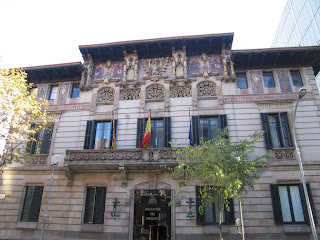 Barcelona is wondrous city offering an architectural feast at every corner, with a mixture of buildings dating back to the Roman times (down in the Gothic part of town) all the way through to contemporary masterpieces (Modernisme Route featuring the famous architects Domènech i Montaner, Antoni Gaudi, etc…). The Palau Montaner, (photo on left) on Calle Mallorca, is a perfect example. Inside (no photos allowed because it is now a Catalan government building), there is a dominating stone staircase, complete with fantastic animal sculptures and wood carvings. A worthwhile visit (5E) if you can speak Castellano or Catalan!

Aside from the beautiful architecture, Barcelona also offers a host of wonderful restaurants. On the one hand, there are many modern-styled restaurants (Tragaluz, Acontraluz, Bestial, all 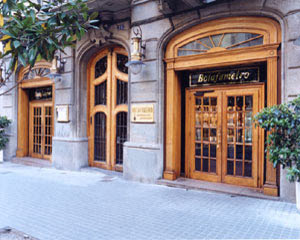 by the same owner…) that provide fusion or Catalan dishes in trendy settings. Meanwhile, there are also many traditional restaurants with grand style decorations. 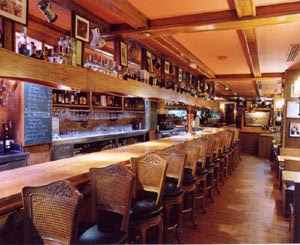 The standout address is Botafumeiro (photos), a seafood lover’s paradise, located at El Gran de Gracia, 81 (+34 932 184 230). Lining the walls on the right, in front of the bar, is the wall of fame, with oodles of celebrity shots (Alan Alda, Calista Flockhart to name just a couple). The highlight (and discovery) of the menu: the percebes (“goose barnacle” in English or pollicipia cornucopia for the real aficionados). The espardenyes a la plancha (grilled sea cucumbers) were a little too chewy. A divine little wine, the Rioja Marques de Campo Noble Crianza 2004. Also to note the wonderful service of José.

Another fine establishment with a Franco-Catalan menu and off the beaten path, is La Venta, situated in Placa Doctor Andreu (+34 93 212 64 55), on the mountain Tibidabo. Great panoramic city views available if you step into the smokey Mirablau bar on the other side of the street. (Spain has yet to go smokeless in restaurants and bars). And, while I didn’t get a chance to taste, another great address is the 7 Portes, Plaza Isabel II, 14, a classic address, down near the port area in the Gothic part of town.

Just as there are many hip restaurants, there has been a mushrooming of hip hotels too (stayed at Hotel 987 on Calle Mallorca where the rooms are VERY modern and the door barely opens without touching the bed). It is worth mentioning, on the other hand, the beautiful and classic Casa Fuster, 132, Paseo de la Gracia +34 902-202 345. The story of this hotel/building is rather singular as the owner built the magnificent building in 1908 out of sheer love for his wife, but then ran out of money. So be it. The building remained and was relatively recently turned into the beautiful 5* hotel.

My visit to Barcelona also coincided with the Barcelona Marathon 2008, March 2nd, which was the marathon in Spain with the most ever runners (about 100,000). The runners were graced with perfect weather: sunny but not too hot.

The city boasts a population of 1.4 million intra muros and 4 million people including the outskirts.

In the 19th century, the city was reorganized into stylized squares with parallel streets, originally designed to have family houses on the sawed off corners allowing for gardens and pleasant open spaces. All the streets going across town are named after (past or present) countries, while all streets going down to the sea are named after people.

The famed La Rambla (meaning “dead river” in arabic) avenue, is now awash in pickpockets (virtually everyone mentioned the risks). The highlight visit was the open air (if covered) Boqueria market, where your eyes will delight in the food displays. Watch out for the scary looking butchers (they have a tendency to show absolutely every part of the lamb and bull…). And you can have wonderful tapas at any number of the little stalls. My choice was El Quim.

Meanwhile, Barcelona continues to struggle with its water. Mid March and the Barcelona water reserves are down to just 20% which is a real drama ahead of summer. The water problem did not dissuade the authorities from continuing the fountain entertainment at Plaza Espana’s (aka Plaça d’Espanya) Fountain de Montjuic. See here on YouTube. Beware: it only starts at 7pm on weekends (Friday-Sunday). Best to be down below to watch.