Cars going on Green? Don’t you find it odd that, in today’s eco-sensitive world, a traffic light has a green light to “go?” Meanwhile, the automotive industry carries the stigma of being one of the most visible causes for global warming. Notwithstanding this notion, there is no doubt that the automotive industry has woken up to the eco-cause. Of course, if I take the French situation, it is perhaps the annual tax of up to 2,600 euros that may have helped “encourage” the interest. Since I am not in the market to buy a car (I already have a diesel Audi A3), I have not been paying particular 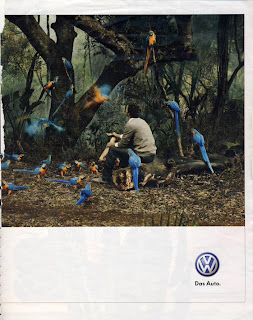 attention. Only recently, I have noticed that automotive advertisements in France are consistently focused on the “green” cause. Of course, at times, it also sounds like they might be trying to appeal to the BoBo’s (Bohemian Bourgeois if you still have not heard of the sociological profile). I highlight two sets of ads stemming from the same company (someone is clearly “sharing best practices” inside BMW!): 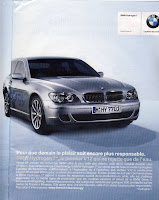 aujourd’hui claire pour l’avenir.” [“Water, a solution today that is clearly for tomorrow.”] The ad discusses “responsible pleasure” and introduces a concept of “durable mobility” which is new to me. The “CleanEnergy” technology enables the car to function equally well with hydrogen as with kerosene. Continuing the text, however, the ad goes on to say that the BMW Hydrogen 7 has not be

en commercialized. Something akin to a virtual launch it seems to me. (See here for a full review from AutoBlogGreen). Considering BMW’s –albeit eco-friendly German–reputation, the green pitch seems like quite a tall order. But, you can see the BMW is putting in a serious effort — and one that should recruit future clients. It has a special CleanEnergy website, that is called BMW Education for 12+ year olds and their teachers…

On the other side of the BMW company, there is Volkswagen. And, I am keen to see how an SUV gets into the green game. With the ad for its VW Tiguan 4×4, the tagline is: “Pour les accros de la ville,” [roughly translated “For the stubborn cityslicker.”] The DPS image juxtaposes the SUV (with a Neuilly licen 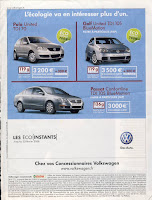 se plate) in the middle of some Amazonian type rain forest, replete with parrots (see right hand page of the DPS up above). The combination of Neuilly and the Amazon smacks of BoBo land, does it not? The sub tagline highlights that the injection engine uses a particulate filter (a.k.a. FAP). Nothing else is said on the matter. VW has also another ad running these days running the tagline: “eco(instants)” (only through Feb 23, you we missed the boat if you are still interested). For each car (there are three offers on promotion in this crammed one page ad, see right image), they highlight the grams of CO² per km. And there is an ‘eco bonus’ (of 700E) for two of the cars.

What strikes me about these ads is that we have moved away from performance (burning rubber!) to look toward the ecological criteria as the first point of entry. However, the consumer is still negative on the automotive industry as a whole. I think the automotive industry should do some thinking as to how to promote the overall industry and gain some traction on the most valid criteria before too many marketers debase the field and banalize the claims. 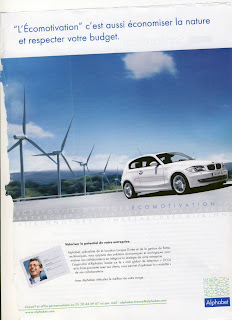 Even the car rental business is getting in on the action. Here is an ad from alphabet.com, a car leasing company, talking about ecomotivation, suggesting that leasing a car is not just about economical leasing rates, but also saving on the planet. (see Ad to the right). Rather consistent to find a BMW in this alphabet ad.

Meanwhile, it is Nissan and Smart that are pulling out the consumer approval within the industry. Of course, Toyota is a pioneer in this domain too.

And the tyre industry is also getting in on the act with their own eco-rating. Michelin, which sells 570 million “green tyres” per year, has been communicating on its tyre which delivers 4g less of CO² per kilometre, uses 0.2 litres of petrol less over 100 kilometres. The Michelin Man (Bibendum) even looks slimmer in certain photos.

A survey by Landor Associates, entitled “ImagePower Survey” p
laced the automotive industry as 4th behind grocery, appliance and body care in terms of brand power. By having specific taxation on CO² emission, there is clearly a reorientation – at least in France – to the way cars are being marketed and sold.