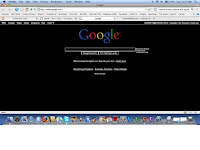 WWF (World Wildlife Foundation) began the Earth Hour — lights out for an hour — in 2007 in Sydney Australia. The notion is that between 8-9pm in your time zone wherever you are in the world, everyone is to turn off their lights (or at least make some environmentally friendly gesture). I am writing this post in NYC at 7:45 pm and I was absolutely overjoyed by the Google surprise. Unlike the speculative gains by Google Black (Blackle, about which I posted in August 07), Google outright declared today that the black color (attached) does nothing to save energy. That said, with Google inverting its homescreen, it is the kind of surprise that merits a full monty HATS OFF. When you know that it is estimated that some 300 million searches are conducted on Google every day… What a great way to raise awareness — especially in New York, where offices and people in general have a habit of just leaving all the lights on all the time (great skyline, but poor on the environment).

If you want to follow the effects around the world, you can try this site: Earth Hour 2008 [now defunct], where you can find all the Sydney partner cities.

Kudos to Google for joining the fight. Signing off at exactly 8pm.. Lights Out.