In one of the quicker demises, Firebrand TV has had to close down (March 5 2008). Launched with quite a lot of hype back in October 2007, the site now writes the following: 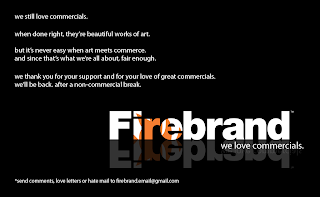 The investors (including Ion, the cable operator on which Firebrand broadcast) apparently refused a refinancing. See the story in Adweek.

“We still love commercials… but it’s never easy when art meets commerce…” And, with retrospect that is quite obvious, especially when the art isn’t officially owned by the site commercializing it (as opposed to a museum, for example). And is the consumer community ready for ads as a cultural exhibit?

As I mentioned in my first post on Firebrand prior to its opening, the content was going to have to be super rich in order to succeed. While they made commendable efforts in terms of presentation style, I tended to think of Firebrand as a resource, rather than as a newsworthy site, meaning that I only visited on occasion when the need arose. I don’t feel I truly ever understood Firebrand’s point of view on ads — and I couldn’t help feeling that the ads they selected were supplied, nay supported by the brands themselves. A little cynical perhaps.

And, what of the business model? An agglomeration of ads (or commercials) that are considered content enough to attract people to watch them voluntarily (on cable and on line) and, in so doing, start to be subjugated to other advertising (“winning, shopping and sharing…”)… On the cable station, viewers were staying tuned for 15 minutes on average which, to me, suggests that it was more like a long surf on line, but not a true engagement. Apparently, there were only 50,000 visitors online in its last month of service…

Co-founder and Chief Creative Officer Roman Vinoly said “I still believe that people have a relationship to brands that contribute to their identity as people, the same way someone is a Yankees or Mets fan, they’re an Adidas of Nike fan…” Surely, brands are a great way to help people relate to their daily lives and realities, helping to craft their identities. However, to refer to Joe Jaffe’s book, “Join the Conversation,” the relationship has to go far beyond the one-way communication of an ad to be truly engaging these days. It is about the conversation.