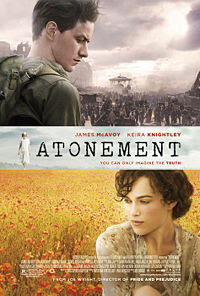 Atonement (released in the UK in Sept 2007 and in USA in Dec 2007), starring James McAvoy, Keira Knightley and Vanessa Redgrave.

Directed by Joe Wright, the film Atonement is a tremendous interpretation of the book by Ian McEwan. Loyal to the book, the film pits honesty and reality against dreams and fantasy. The film delightfully intermingles the opposing visions of the same event.

The film poses the difficult question: at what age is too young to understand the difference between good and evil?

The film’s backbone is held by the evil little sister, Briony Tallis, at three distinct phases in her life: the “innocent” playwriting 13-year old (Saoirse Ronan) in England 1935; the 30-year old wartime nurse (Romola Garai); and the contrite later-in-life Briony, played by Vanessa Redgrave, at the close of the century. In her final stage, Briony reflects on her childish actions and, while dying of vascular dementia, lies once more in an effort to have two wrongs make a right. An intriguing ending to a powerful film.

The imperfect love affair between Cecilia (Knightley) and the family lackey’s son, Robbie (McAvoy), is as visceral as it is untraditional. The script and acting magnificently dance along a line of confusion and passion.

The movie won an Oscar for the best Best Original Score at the 80th Academy Awards, and was nominated for six others, including Best Picture, Best Writing (Adapted Screenplay) and Best Supporting Actress. At the 61st British Academy Film Awards, it won the Best Film of the Year, and the Production Design award.

Anyone else see it and feel differently about Atonement?