After a first experience on Emirates Airline, two weeks ago (post here), I have since taken three more flights with Emirates (EK). Turns out our first experience was not one-off. We flew from Dubai to Nairobi a week later, then on Thursday we did a double header: Nairobi to Dubai (5 hours) then Dubai to Paris (7 hours) with a two and half hour layover in Dubai’s bustling airport. Each time, the flight (in Economy) was a pleasure.

This last time, we added a special wrinkle, something we could have made a real flap about: a last minute injury. At 1pm on Thursday, our very last day on holidays, my son, Oscar, fell by the pool on a lava rock and gashed his knee. So badly, that it needed 6 stitches which were put in by the Serena Lodge (Amboseli) medic. The “operation” took over an hour and a half (including having to find him, first) and happened on our room’s balcony (i.e. outside), replete with monkeys onlooking (photo to right; one of them finally managed to steal some cotton). 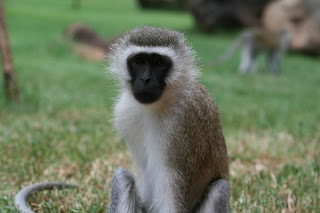 With Oscar sown up, we hit the road (and in Kenya, that is not an understatement). Our valiant driver, Ibrahim, took us to Nairobi airport in a little over 5 hours, with Oscar stretched out in the backseat. We arrived at the airport in plenty of time and were able to get a decent seat for Oscar in order for him to keep his leg straight as much as possible.

On the flight EK722 (May 1) to Dubai, the staff were good enough to reserve a set of four seats which allowed Oscar to sleep stretched out for the full 5 hours. I would like to signal out the kind services of Mohamed Haji. When we got to Dubai, Oscar got a fast and furious nose bleed. This afforded us a visit to the Dubai Airport medical centre. A doctor from Senegal and a nurse from Kerala, India, took care of Oscar’s nose then reviewed and re-dressed his knee. All clear. And very civilised! Then Oscar was taken by wheelchair to the “Special Handling” area which meant a comfortable seat, juice and biscuits… The rest of us managed to find seats outside (although they are at a real premium at the overcrowded Dubai departures level).

Our flight EK073 (May 2) from Dubai to Paris was as pleasurable as the flight out (again on the Boeing 777-300ER), if different because of Oscar’s leg.

Here are the further thoughts I would like to add to the prior post regarding the EK service:

* The flight attendants are very international — intentionally, Emirates recruits from a very wide array of nationalities, allowing them to announce at the outset: “On this flight, we have crew members speaking the following languages…” On this EK073, there were 10 different nationalities. Some kind of proof that diversity pays! The wonderful staff that helped us out included the energetic Lydie (an Aussie) and dapper Aman. There was also the kind Z’ied (not 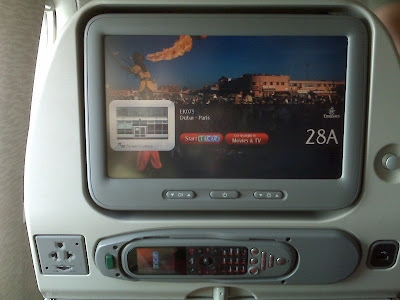 sure on the spelling).

* Each seat is equipped with a “ICE” (information, communication, entertainment) system. The ICE digital wide screen is a touchscreen (super easy to use) and is as good as it gets.

* The USB slot at each seat (to the right of the telephone-cum-“remote control”) is to allow passengers to view your holiday pictures on the wide screen TV or to listen to your personal media player through the ICE system. IPODs can even be read if they are set to “disk mode.”

* The ICE booklet (for May) is very agreeable to read and shows the extremely wide variety of options and selections available. It even includes a set of good old rock’n’roll box sets, a random set of audio books (Crime & Punishment, David Copperfield, Tom Peters Live in London…), comedy (Monty Python, Woody Allen, Peter Sellers…) and a brief guide to the anthology of major composers and classical musical periods over the past 500 years (nice pedagogical touch, no?).

In any event, as if I needed any further proof, the very day we took our flight back, the newspapers were splattered with the Emirates financial results: profits rocketed up 62% to Dh5.3 billion in fiscal year 2008 (Mar) on revenues of Dh41.15 billion, despite a Dh1.83 billion extra fuel bill. As this Gulf News article writes, Emirates Airline is indeed an important part of the Dubai success story:

“Emirates contributes about Dh47 billion, or nearly a quarter of Dubai’s Dh198 billion GDP, to its economy, the airline said yesterday.”

Hopefully the bosses of these flight attendants will get wind of their great service. In the meantime, I can only say: fly Emirates whenever you can!