Leadership means getting the team to row in the same direction!

In Time Magazine’s December 3, 2007 issue, I read with great passion the article “Ready All, Row” by Thomas K. Grose (so much so that I cut out the article and am still keen to blog about it many months later). In this article, Grose talks about what it takes to win THE Boat Race. This 4-mile boat race is fought between two eights of Cambridge and Oxford universities every April on the Thames River. Among the many rivalries in the world, this is of course one of the most historic, dating back to 1829. The training, the hype and the race itself are extensive and intensive. Nearly 8 million people in the UK tune in, with millions more overseas. And, believing that sport is a perfect training ground for business, I am always on the lookout for lessons in leadership.

I often put in opposition two images of leadership style: (1) where the 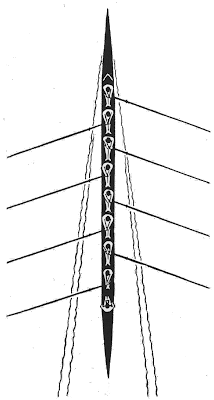 individuals in the boat are driven to excel and the direction sought of the boat is absolute perfection; and (2) where the focus is on team chemistry and individual expression where synchronization is more important than direction. Of course, neither path is necessarily at the exclusion of the other. However, as a matter of course, I tend to prefer the second orientation, putting an emphasis first on teamwork, especially when you don’t always have access to the best talent. Knowing how to extract the best out of the personnel you have allows for the greatest leverage — and people with talent will tend to gravitate to you. Key to success is the ability to galvanize the team around the same values and objectives. And, as the TIME article suggests, the interplay of the personalities is critical to gaining the extra insights, effort and results.

What does it take to create a well synched boat or team? The team needs superior communication skills (listening and sharing). It helps to have gone through some tough times together (and survived). And then, there is the alchemy that allows the team to be “in the zone” (or the groove), especially when it counts most. When these elements are suitably brought together, the fact that the team may have chosen the wrong lane at the start, been slightly off course at certain moments or hit an unexpected wave will more than likely be overcome.

For the record, the 2008 Race, this past April, was won by Oxford for the sixth time in this young 21st century–and yet with the slowest time clocked since 1947. Cambridge still holds an overall edge 79 – 74 with one dead heat. And, for one of the more eccentric reviews of this year’s race, try Mark de Rond’s piece (Cambridge Judge Business School) on orgtheory.net, “Why Cambridge Won the Race and Why It Nearly Lost It,” written while intoxicated. I will be looking out for de Rond’s book to be published this year, “Subjectivity of Performance,” as he delves into business learnings from the world of THE boat race.