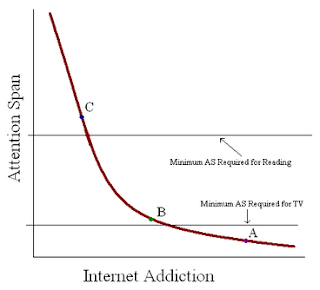 I was stunned to see that television ogling by Americans, who are over 12 years old, has continued to rise despite the Internet. A census bureau study, published in the USA Today of June 25, 2008, said that since the year 2000, people over 12 years old are watching television 71 days/year, up 8 days, and spending 202 hours more per year (1704 hours vs 1502 in 2000). What’s not clear in the USA Today poll is whether television via the Internet has been included. Then, between video games and Internet, the American adult is giving new meaning to screen capture.

And, it would be interesting to then compare book sales (which of course do not necessarily mean book reading) during the same period. The Publishers.org site, via the Association of American Publishers, says that “U.S. publishers had net sales of $25 billion in 2007; a 3.2 percent increase from 2006 with a compound growth rate of 2.5 percent per year since 2002.” Naturally, this is no indication of whether people are actually reading more (dollar value is not indicative of units; and there is no neutralisation of the population increase). While internet and television can allow for “zapping” behaviour, reading in byte sizes is hardly propitious for a good read; and with reduced time, it seems hardly likely that reading activity will increase. Then again, is reading on the Internet (news stories, stories, blogs, etc.) viable reading?