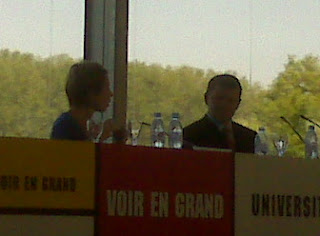 The kick off of the MEDEF’s Université d’Ete 2008 “Voir en Grand / Think Big” was made this afternoon at the Polytechnique campus outside of Paris. Laurence Parisot, President of the MEDEF, introduced his Majesty King Abdallah II of Jordan who gave a 20-minute speech (before going off to meet with President Sarkozy). The King’s speech lauded the efforts of France in the Middle East and said that France remains one of the most important partners for Jordan. King Abdallah is clearly a trail blazer. Dressed in a conservative red tie, he introduced himself in an elegant French, then passed into English for the main speech. Abdallah has his own website (see KingAbdallah.jo) and emphasized the importance of private enterprise in the development of his country. King Abdallah clearly exemplifies Think Big.

Two messages delivered by King Abdallah that struck me (paraphrased below):

* More than half of Jordan’s population is under 18 years old. A young demography, highly educated, with energy for change.
* Until Palestinians are given a home, there will continue to be a fragility in the trust between the Muslim World and the West. Otherwise, there will continue to be instability in the region. What struck me was that there is only tension with the West. Frankly, it seems a straightforward answer — if a little over-simplified.

As Ms. Parisot stated, King Abdallah is a visionary — with bold ambitions. Ms. Parisot mentioned the singular project that Jordan is joint-running with Israel to create a canal between the Red Sea to the Dead Sea. The project which is due to begin in 2011, will include draining the Red Sea into the Dead Sea — what a concept. The project will then enable hydroelectric power as well as the supply of desalinsated water (850 million cubic metres/year). Read here for the wikipedia entry.