I attended a small “bloggers only” interview at the MEDEF Université d’Eté 2008 of Luc Chatel, Secretary of State for Consumer affairs and Industry as well as Spokesman of the Government. Run by Loic Lemeur, the 20 minute interview had few pearls. But two statements that I found of interest (not necessarily novel):

Mr Chatel enjoys using the statistic that in France today, 20 out of the 25 top companies existed in the 1960s. In the US, 6 of the top 25 companies were around when I was born. (As it happens Mr Chatel is my junior by just one day, and was born in Bethesda, Maryland). The point? There is a structural tendency for US companies to be built from scratch via a very a dynamic entrepreneurial spirit. That said, I didn’t capture from Mr Chatel how he ranked the Top 25 (Forbes 2000, Market Cap, Sales…?). Below the list of the Top 25 French (and then US) companies as of end of 2007 courtesy of Forbes 2000, ranked by Market Cap.

FRANCE TOP 25 BASED ON MARKET CAP 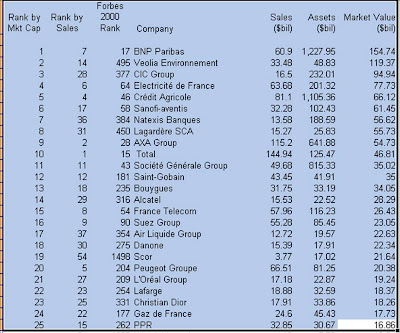 USA TOP 25 BASED ON MARKET CAP 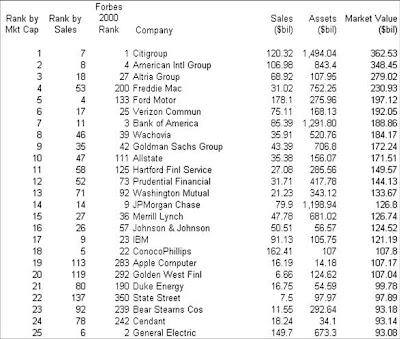 The second comment from Mr Chatel that caught my ear: “Je ne crois pas dans le partage du travail comme moyen d’augmenter la croissance.” Translated: “I don’t believe in sharing work as a means to achieve greater growth.” Taken out of context as I admit I am doing to some degree, what Mr Chatel is ignoring is the opportunity — and need for — a greater sense of collaboration and cooperation … What of web 2.0 and open source innovation?