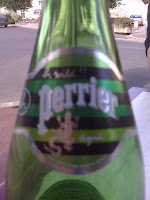 Ever thought about dressing up your bottle? Here’s a cross-marketing campaign that caught my eye.

When pouring out this Perrier bottle (sorry that the shot isn’t in focus) at a bar outside the beautiful Chateau of Sully-sur-Loire (in the Loiret), I found the logo of agnès b. on the outside label. The agnès b. website talks about this program in its neat little “agenda” area (good idea), saying:

“At Perrier’s invitation, agnès b. has customized a 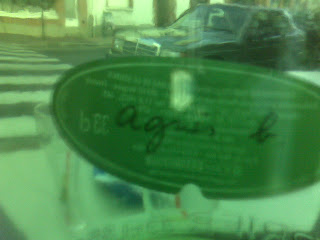 bottle and a can of the famous sparkling water. These limited edition creations echo some of the designer’s favourite motifs, the lizard and roses. The bottles will be found on café tables from mid-June onwards. However, we will have to wait until November before we can buy the cans in the stores. A successful collaboration which will feature in agnès b. shop windows throughout June.”

What I like about this idea is the surprise element (example: the signing of the inside of the label as in the photo to the right). What was a little harder to figure out what is the synergy between Perrier and agnès b.?

A little reading up on the company and you find out that Agnès Troublé (CEO and founder) has a diverse set of interests under the company’s banner, including a film production company and art galleries. Geographically, with 1,000 of its 1,500 employees based in Asia, you can see where resides the company’s strength. Clearly, agnes b. is a versatile brand (and of course, I would be remiss not to mention its collaboration with L’Oréal’s Club de Créateurs de Beauté).

On the Perrier side, they managed to dress up their bottle one more different way : bottle as mannequin. Why not?