Some journeys cannot be put into words. 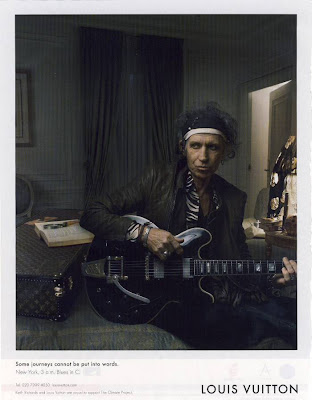 Have you all seen this absolutely fantastic advertisement from Louis Vuitton? In this ad above, we have Keith Richards photographed by Annie Leibovitz. It is a forceful combination of an experience, a nostalgia and a baby boomer. You have to laugh at the book with the magnifying glass on top of the suitcase. And then there’s the skull & bones draped over the light as well as a skull at the base of the light.

This ad campaign has been running since Spring 2008 along with another great “personality” piece featuring Francis Ford Coppola and his daughter (and comes in the wake of past LV stars Mikhail Gorbachev, Andre Agassi [truly LV as in Las Vegas] and Catherine Deneuve…).

And, on top of that, the ad also bears the statement: “Keith Richards and Louis Vuitton are proud to support The Climate Project” (which was founded by Al Gore). Too bad there is no web link on the ad. Otherwise, a flawless execution. And all the fees for Richards apparently went directly to The Climate Project.

And, if Richards and Coppola weren’t powerful enough, the word is out that Sean Connery is the next Louis Vuitton face. See here from Stylist.com on this story. For 2009, my money will be on Clint Eastwood and Alain Delon.

Others blogging on these ads — clearly a good rating on the blogosphere: