Series 1 Episode 6 – The Germans, Fawlty Towers
—————————————-
When Sybil is out of action in hospital, Basil is left to cope with his shabby hotel (in Torquay) in her absence. What could go wrong when there’s a fire drill scheduled, a moose’s head to hang and a party of German tourists due? Quite a lot really, but it will all be fine as long as… you don’t mention the war. 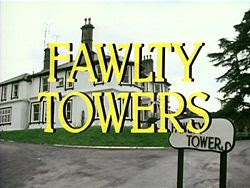 Many people quote “The Germans” as their favourite episode of Fawlty Towers and, while I would pick another (The Rat), those sequences between Mr Basil Fawlty (John Cleese) and the German tourists are certainly among the most memorable of the series.

Direct quotes from this episode:

Speaking of starting it, I was challenged in a conversation a little while back as to which political party in the US was more responsible for starting wars. The supposition was that the Republican hawks were more prone to engage in war than the Democrats. When I mentioned a few top of mind wars (WWI, WWII, Korea…) as having a Democratic president at the outset of the war, it led me to investigate further. In the last 38 years, each significant engagement/war has indeed been started by Republican presidents (you also have to bear in mind that a Republican president has been in office 28 of those 38 years).

There should be at least four qualifiers before attempting to come to a conclusion. (1) What would be more interesting perhaps is to look at which party was dominating Congress at the times when the meaty decisions/approvals were made… (2) A second consideration is whether the war can be judged to have been a “good” or “necessary” war. (3) What was the outcome? And (4), who was responsible for carrying out and/or ending the war?

Anyway, I have put together a list of most the more significant wars since the 19th century (and I have chosen to include all the recent wars). A more rigourous and comprehensive study would have to go into all the wars (definition of “war” needing to be clarified). I have not touched the wars with the Indians for example. The list of all military wars/engagements involving the USA has been made over on Wikipedia here. In any event, if you look at the associated presidents below, it is not exactly conclusive as to which party is more likely to declare war.

Invasion of Grenada 1993 under Reagan (R)

The only conclusion I feel like making is that, despite all the civilizing that we human beings have been doing, the net net is that military conflicts, whether borne of need for power, zeal or fear, are an ugly and consistent part of our existence. And, for sure, there are necessary wars. If the world were run by women, would it be entirely different? Female Presidents, Prime Ministers, Queens and Empresses throughout the ages have been known or associated with wars (see here for a list from womenhistory.com). Solutions to avoid an escalation in wars would include heightened education, international integration and, most importantly, increased prosperity. However, given the current and foreseeable economic crises and the hardships and pressures that will inevitably arise, it would seem more likely that we are in store for more conflicts than less in the near future. And, that’s when I take refuge in Fawlty Towers, and return to viewing Manuel being clobbered on the head about his Siberian Hamster [aka rat].

Your thoughts and comments are welcome!