The least I can say for our New Year’s, is that it started off with a bang for us. A thriller in Manila, to coin a phrase a little literally (and litorally). For the first two days of 2009, I took my family to the island of Corregidor in the mouth of the Bay of Manila. On this my 3rd visit to Corregidor, “the Rock” in the unarguable form of a tadpole, I can begin to say that I now know the lay of the land. The island of Corregidor — the site of devastating bombing* in WWII and the capture of 11,000 US and Filipino military personnel, including my grandfather on May 6, 1942 — is a fascinating historical place [see here to read about the Battle of Corregidor]. This 3rd visit to Corregidor, armed with my wife and children, turned out to be most particular, if not spectacular. It all started out rather well. Arriving via ‘banca’ (pictured below right) from Cabcaben on the southeast of Bataan, we landed in a port of shamefully polluted waters (washed in from Manila). Once ashore, we then enjoyed a lazy afternoon at the Corregidor Inn, in which we were stay the night.

Activities included attempting to swim in the cold pool, having the run of an empty playground and then swimming in the warmer sea at the nearby beach. Fortunately, the water where we swam on bottomside was distanced from the banca landing spot (other side of the island). As we swam, we noticed the ever increasing wind, but cast caution aside in pursuit of gaiety and exercise. Apparently, we were feeling the perimeter effects of the typhoon off Palawan, many hundreds of miles southwest of us (364 miles to be more exact).

A little nervously, I also watched as the Sun Cruises ferry boat departed mid afternoon, returning to Manila loaded with all the other tourists on the island. We were the only remaining tourists on the island. That evening, in by now blustering winds, we met up with newly installed residents of Corregidor, Steve and Marcia Kwiecinski. Steve and Marcia decided to retire to Corregidor to pursue the footsteps, to a certain degree,

of Steve’s father (Staff Sgt Walter Kwiecinski) who was commander of the last functioning major gun (at Battery Way) on the island. Like my grandfather, Steve’s father (who was an uncommonly tall 6’6 and height was looked down upon by the Japanese captors), was then captured on Corregidor and imprisoned in a series of Japanese POW camps. Fortunately, Sergeant Kwiecinski survived the war and was able to share, later on in his life, some of his travails with Steve (link no longer functioning). Over drinks and dinner, Steve and I shared our stories and mutual interest in Corregidor. Certainly, one of the most interesting stories about Sgt Kwiecinski is that he was imprisoned in POW camps 12&17 in Kokura and saw Bockscar, the B-29 bomber loaded with an atomic bomb, circle overhead and then unload on Nagasaki. Had it not been for smoke coverage, the city of Kokura was to have been the initial target. For those who might wish to contact Steve in a quest to know more about the US history on Corregidor, you can use steveontherock AT gmail DOT com.

After dinner, we retired to our rooms to find our shutters fluttering on their hinges. Repairs were hastily done, but as we were to find out, to no avail. The wind was now blowing full force. The windows and shutters shook and banged and clanged all night long. Sleep was virtually hopeless. If the prior night’s new year’s experience (night of December 31) with the firecrackers going off outside our windows all night long were not enough of an experience in itself (the celebratory handheld firecrackers are a Filipino tradition), perhaps it was just practice for this next night of banging shutters.  (Photo of palm in the wind courtesy of Steve). 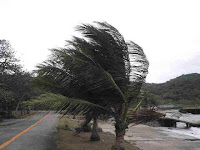 The following morning, to help roust us out of any overnight fatigue, we were informed that, based on the Manila Bay Coast Guard’s decision, the ferry (capable of carrying 150 pax) would not be coming from Manila (48 kilometres away) to pick us up. This was an issue.

To start with, our plane back to Paris (non-refundable, non-changeable tickets) left that evening. To continue, the next available plane out was 10 days later…and one way tickets for the family would have to be repurchased. Moreover, because of the gale-force winds, the ferry would be cancelled for up to three days, meaning that we would have become more than familiar with island life, its 9 km2 (1,735 acres) terrain, solitary hotel, 130 island lodgers and the “karaoke café” on bottomside. On top of that, we would have had a surprise extra week to visit Manila, replete with extra hotel and board expenses. Once we absorbed those issues, there were still the intervening questions of the beginning of school, work, numerous medical rendez-vous and a non-refundable trip to London.

In sum, not good.

Many calls later, and helped by our travel agent Teresa and the Corregidor Inn staff, we were able to scramble a helicopter, with a pilot committed enough to fly through the typhoon winds to our island to evacuate us. Having already paid for the chopper, we were then informed that they could only take 3 pax. Sophie’s Choice is a grippingly tragic WWII film, but wrong war… and they were mistaken in thinking that my Hollywood-style looks and link to the Pacific War through my grandfather, would cause me to enjoy a replay. We were going to all go together or not at all. Of course, I dramatize a bit. All we had to do was pay for two helicopter rides. Despite my protestations that we had clearly and knowingly checked in as a family of four, our backs were somewhat up against the wall. Force majeure they kept telling me.

The solution, throwing total caution and dollars to the wind: not one, but two whopper chopper bills.

The organizing (and monopolistic) tour operator (Sun Cruises) participated in the [financial] damage fortunately. Despite some harrowing gusts, we were safely whisked away in two separate loads. And, we made our plane not without a little emotion.

Post Scriptum: In the morning, despite the commotion, we made a private visit of the island with Bryan, our kindly tour guide, accompanied by Steve and Marcia. The island is well arranged for a visit if you want to know more about the second most bombed ever piece of land in history (behind Malta). The 30-minute Light & Sound show in the famed Malinta Tunnel is not high quality, but is quite vivid and worth it as long as you don’t have to pay outright the full fare (2500 pesos or $54). The Corregidor guns are certainly impressive and story surrounding them highly engaging. For more on the battle of Corregidor, read here at HyperWar Foundation as well as the personal account of a soldier, Roy Edgar Hays, who was taken prisoner at Corregidor.

* From Nationmaster: “Japanese bombing and shelling [of Corregidor] continued with unrelenting ferocity [after the fall of Bataan]. Japanese aircraft flew 614 missions dropping 1,701 bombs totaling some three hundred sixty-five tons of explosive. Joining the aerial bombardment were nine 240 mm howitzers, thirty-four 149 mm howitzers, and thirty-two other artillery pieces, which pounded Corregidor day and night. It was estimated that on May 4 alone, more than 16,000 shells hit Corregidor.”