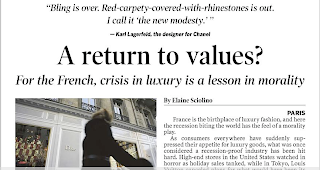 Recession brings luxury down to earth…but what of the more urgent changes needed?

The Herald Tribune ran a front page article entitled “A return to Values?” (15 Jan 2009) on the situation of the French luxury market.  What struck me about this article was the inherent contradiction about how France, the country that frowns heavily on the bling bling nature of the nouveaux riches, should also yet be the country of reference and, along with Italy, the leader in luxury wares.  Both the French and Italians have essentially got a wrap on the luxury market (at least in terms of reputation) through masterful craftsmanship, suave marketing and a culture of developing taste and sophistication.  The curiosity is that, in France (or in Italy), you really cannot be seen sporting too overtly any of the luxury items.  The socialistic veil would claim that all people should be made equal… But, beyond the impact on luxury consumption, the bigger question for me is whether this crisis will also have a deeper paradigmatic change in France in the way the economy is actually “engineered” for growth.

Major luxury brands are talking of bringing prices down (some are even talking about discounting) and cutting back personnel.  End of November 2008, LVMH dropped prices by an average of 7% in Japan.  Many brands in India have announced major discounts (read here for the story from Business Standard India).  Chanel announced the cutting back of 200 temporary employees.  Champagne sales (with the proper appellation) were off 16.5% in the month of October 2008 versus the year before (having been -2.4% in the first nine months of 2008).  Karl Lagerfeld, Chanel’s designer, is quoted in the IHT article as saying “Bling is over.  Red-carpety-covered-with-rhinestones is out.  I call it ‘the new modesty.’”  Another IHT article in early December already traced the fall in luxury prices in the US.

The IHT article, written by Elaine Sciolino, writes that “only in hyper intellectual France could a sharp economic downturn be widely lauded for posing a crisis in values.”  The statement is inaccurate on two counts.  First, the hyper intellectual are a clique of people (a portion of which are often given the moniker “la gauche caviar”) which, by definition, is limited in number and therefore cannot also be “widely” praising such a crisis.  Secondly, the economic crisis that is hitting so many countries will also give rise to criticisms and rejection of the past “systems and values” that are at the root of the current situation.

For example, I believe that the USA, among other countries, is clearly reviewing its own value systems.  In coordination with the arrival of President-Elect Obama, there is a true opportunity for the US to revisit its values.  Hopefully, going well beyond the issues of financial liquidity, credit living and low savings rates, such a re-evaluation will look at the three biggest problems: (1) the lack of curiosity and poor general education levels, (2) the excessive consumerism and a reconsideration of the value of money, and (3) poor health levels, including poor eating habits combined with the terribly low medical coverage.

During the Great Depression, many people were no doubt forced to change their habits.  But, as the years went by, perhaps blurred by the impact of WWII, it seems that the Depression did not provoke any long-term change in values — at least not beyond the generation that was directly affected.  Will the countries hit by the current recession — assuming it gets deeper — truly change the paradigms on any long-term basis?  To talk of the need for a revolution is misguided in ambition; but, there will surely be enough people where the impact of this current recession will enter into their psyche.  As with the recession itself, you see that the psychological issues play a hard-to-overstate role in the duration and depth of the crisis.  But, what scar tissues will linger in the fabric of society?

In France and other mature countries, the removal of excesses [in the luxury market] and a return to values are seemingly upon us, at least for now.  Whether the crisis also cleanses the economies of its excessively inefficient components would appear to be the bigger question for France and its mature and less dynamic European partners (i.e. Italy, Belgium…).  The ability to restructure in down times–to help create a healthier base in the upcycle–will be critical for the future of France.  And, if there were such change brought to bear, then one could imagine that the luxury market will flourish with as great, if not greater fanfare in the next upturn.  If not, we might truly want to batten down the hatches.

What do you think are going to be lasting effects of this recession?