As we prepare for the January 20, 2009 inauguration of President-elect Obama (which you can follow with live streaming on Facebook/CNN) there are several organisations that have come up with marketing initiatives showing the speed and conviction of certain brands and people.

With the momentum, tremendous popularity and hype surrounding Obama’s arrival, brands that have seen fit to align themselves with the President-elect have clearly shown entrepreneurial spirit for being able (a) to create a concrete link and (b) to mix politics and business so overtly.

I have done a quick list of the three best cross-promotions around his campaign and upcoming presidency.

In reverse order, coming in third, I look at the new Pepsi logo — which was launched in  autumn 2008, and see a subtle resemblance (Advertising Age talks here about the evolution in the logo) to the Obama ’08 logo. Touching the cornerstone brand’s logo under the influence of the Obama campaign is fairly bold move.

Coming in second, is Ben & Jerry who have launched a new flavour: YES PECAN.  Per the site, Ben & Jerry says, this new flavour has “Amber Waves of Buttery Ice Cream with Roasted Non-Partisan Pecans…”  And, if you buy Yes Pecan, they donate the proceeds to the Education Fund of The Common Cause, “…a nonpartisan, nonprofit advocacy organization founded as a vehicle for citizens to make their voices heard in the political process.”  B&J have a full social media package, with a page on Facebook too. 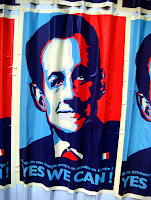 And, coming in first, Greenpeace France who, in early December 2008, surreptiously plastered Paris with a poster of France’s President Nicolas Sarkozy, emblazoned with YES WE CAN, and imitating the (outspoken street artist) Shepard Fairey campaign HOPE poster of Obama (below left).  It took a while for the owner of the poster to come to light, helping to create a good amount of buzz.  Nominally allying France with the USA, the Greenpeace SarkObama campaign was in an effort to convince Sarkozy to reduce greenhouse gases by 30%.  Here is the story from the Windsor Star (Ontario, Canada) as well as, en français, on the Greenpeace blog.

Having just completed this post, I did a last minute review online about this topic and, to my amusement, found that NPR had run exactly the same type of article on Jan 16, with the difference that they found the IKEA “Embrace Change
’09” campaign too.