A selection of sites and addresses to retain (or not) in Manila, Philippines

In our two days touring Manila, we made a few decisive visits which I will share with you in case you have planned to go to Manila. 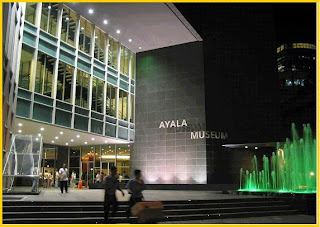 On the cultural side, we had virtually a solo visit of the splendid Ayala Museum, on De La Rosa Street, off Greenbelt Park, +(63) 757-7117. With some very well presented expositions, we very much enjoyed the magnificent permanent collection, Gold of Ancestors, including a very suave introductory film in a very comfy lounge area. The collection dates from 10th to 13th century replete with chastity belts, masks, crowns and a fabulous 3.6kg “Sacred Thread” sash. (Other blog on Ayala: restyo.blogspot). On the second floor, there is an intricate collection of 60 dioramas depicting major events in Filipino history. And on the third floor, we also enjoyed the temporary exposition of Fernando Amorsolo, a 20th century painter (1892-1972) who captured Filipino images through (admittedly sometimes a little banal) portraits.

Other sites we visited included the tour of Intramuros, Fort Santiago, 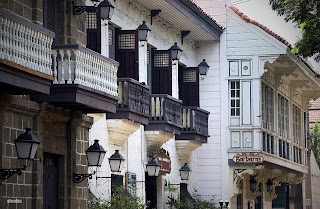 St Augstin Church, Manila Cathedral (both churchly visits were stunted by wedding proceedings) and, the highlight-not-to-be-missed Casa Manila (pictured right) with its exceptional top floor living room and well equipped kitchen.Since our second day in Manila was a Monday, the selection of museums was reduced to virtually nil (most museums are closed on Monday). Instead, we enjoyed a visit to the Manila Park Oceanarium, a vivid aquarium complete with a fish foot spa treatment where Nibble fish bite off old skin from your feet. The collection of exotic fish in the side aquariums was more impressive than the main tank. A standout quirky feature was the small display of marine life capable of feretting out an existence in the foul water piped in directly from Manila Bay (on which the Oceanarium is located).On the restaurant front, we had a lovely dinner overlooking the Bay at Pantalan Maynila with a kind server, Charlie, who shared a birthday with our son, Oscar. In the same vicinity off Rizal Park, we had a less glorious dinner at Blue Bay replete with three different sources of “live” music (1 karaoke, 1 live band and a guitar trio) blaring from all sides. Aside from the ominous warning of mosquitoes and a bill for the equivalent of 10.50 euros (690 pesos) for 4 people, the dinner provided myriad moments of laughter, if less good food. The highlight meal during our stay in Manila was at Zuni, a fusion restaurant at the upscale Greenbelt 5, in Makati. We had a quick and worthwhile set of tapas at Casa Armas, (523-0189) Bocobo St in the bohemian Malate District. A quaint little address. In case you get a little peckish (or esurient for you Cheeseshop fans), a good idea is to try the local Filipino bakery where the cookies and pastries are plain but decent (not too much sugar) and you certainly can’t beat the prices.We also visited Mall of Asia, purportedly Asia’s largest mall. It being a few days before Christmas — which is plentifully celebrated in Manila — the mall was swarming with people. There was a rock concert and fashion show going on in the midst of the shopping. Among other curiosities, there was a long line waiting to get into the trendy Flip Flop store to buy Havaianas sandals. We also came across an Accessorize rip-off store “AksesoriZ” (oddly, there was an error on the logo on the item we purchased with the R being typed P).Manila isn’t exactly a mecca for tourists. Traffic is generally pretty congested, even on Sundays. But, there are some good spots to visit and, if you are there, you might as well take advantage of what is on offer.