How much is your friendship worth? Just 37 cents!

I love this. Burger King is up to its notorious self, finding all sorts of ways to gain rebellious publicity. In this most recent activity, Burger King announced that it would give any person that drops 10 Facebook friends a coupon to buy a Whopper. With a Whopper priced at $43.69, that would effectively put the price tag of a friend on Facebook at 37 cents. The campaign, called Whopper Sacrifice, is now closed as some 24,000 people quickly sacrificed 10 of their friends to reap the Whopper coupon. Here is the story from the New York Times. If you want to check out the Whopper Sacrifice application, it’s here. And, if you are one of the people on the losing end, who got dropped by a now “ex-friend,” the Burger King team were sufficiently foreseeing, to provide the angry-gram application directly on their site (photo top right), with the ability to write to your ex-friend a nasty letter (replete with an angry hamburger). Here below s a neat little artistic rendering of the program from a Kenyan, Joe Ngari. 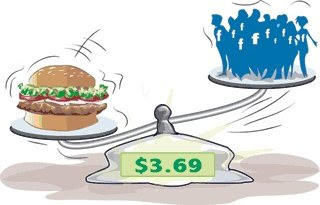 Frankly, it’s a wonderful piece of marketing, (a) getting at the notion of those who have oversubscribed their Friends, (b) giving out a free burger during the difficult economic times, and all this (c) with an application on Facebook, the second most visited site, after Google, over the Christmas period. Kudos to the BK marketing team and the Crispin Porter & Bogusky ad agency that came up with this counter intuitive program. And the cost? Ok, let’s say $10,000 for the FB app. Add $20,000 for the 2 light websites (angry-gram and Sacrifice Whopper) including the hosting for the sake of argument. And, let’s say there’s a whopping 30% uptake on the coupons (30% of $88,560) meaning $26,568 worth of redemption of the coupons sent out electronically, of course, taken at a reasonable cost of goods of perhaps 15% (I have no idea of the fast food COGS), adds less than $4,000. Of course, there are the agency fees to add. So the total cost would be $35K plus agency fees. Not bad from where I sit, even if I don’t like fast food.

Somehow, I managed not to get dropped, but I’d love to hear your reactions!