Ever heard of BASE jumping? I had not until I was sent this video (below). BASE stands for Building, Antenna, Span, Earth. To qualify for a BASE number, you need to have jumped off from all four locations. And, on a variation on a theme, you can add an aerodynamic “wingsuit”, alternatively called “squirrel” or “birdman” suit before pulling the chord. Wingsuit Base Jumping is clearly one of the most extreme sports out there and you can live it vicariously through these exceptional videos below. There is no trickery in these videos. This is the real thing. As is my wont, I have done a little digging around to find out a little bit about BASE jumping. Read on below for more.

wingsuit base jumping from Ali on Vimeo.

Evidently, one of the best places to do this is in Norway as indicated in the film above. But, it seems that the “Earth” jumping in wingsuits has a set of most recommended spots, meaning you get to do some travelling before you can casually sign up. A report from ARTe (en français) is also available on YouTube:

BASE jumping was apparently started in 1978 and mainstreamed in the early 1980s. Considering you need to jump from a building and an antenna, there are legal challenges to overcome. To whom do you apply to say that you would like to jump off a skyscraper? You also need to consider carefully where you land. To do a BASE jump, you don’t need to use the wingsuit. That is an intermediary option for the longer jumps before you get to the parachute. The number of BASE jumpers (“BASE numbers” or people that have managed to execute a jump from all four locations) is now around 1,300 and the graph seems to be rising fast (the tipping point seems to be around the year 2000… not to metion the million+ viewers of the videos above. The trusty Wikipedia provides some good information.

For those of you who need to brush up on the gravitational pull, you need 12 seconds of freefalling before you reach maximum speed which is 119 mph or 191.59 kph, meaning you are hurtling down at 53.04 metres per second. My favourite statistic (pictured below): 30 people jumping simultaneously from the Ostankino Tower in Moscow (2004) and apparently captured in the Guinness Book of World Records. 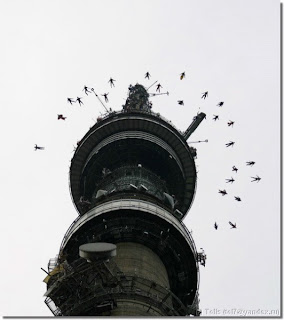 And if you want to get into the action, there is advice (safety tips, how to do it, where to do it) for those of you who are singularly crazy enough to do it here from the Dropzone. There seems to be much debate as to how many skydives one ought to do before starting to do BASE jumping. The debate rages between 100 and 1,000 sky dives. See here for the BLiNC Magazine’s version on the debate. (BLiNC claims to be the source for everything you wanted to know about Base Jumping).

But, aside from the untold costs (equipment, travel, etc.) of getting into BASE jumping, now time for some cosmic reality: there are plenty of fatalities. Here is a list of the BASE jumping recorded fatalities that goes back to 1981. This particular list chronicles 124 deaths (as of summer 2008), including 7 women. Among other statistics you can find here with another slightly different list, it would seem that jumping from Earth is the most common departure point. And, in terms of departure point fatalities, not surprisingly Earth departures constitute two thirds of the recorded fatalities. Antenna comes second (at 14%). 74% of the fatalities have non-gear related reasons. Only 14% of the fatalities concern the wingsuit variety. Curiously, the stats say that just 49% died on impact.

Clearly, BASE jumping does not stand to get this Blogger Actively Subscribing to this Exercise. However, the wingsuit videos are still absolutely mind boggling to watch.