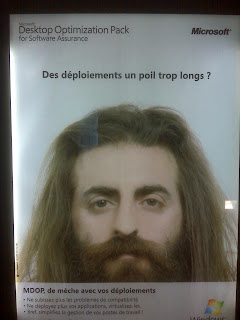 Microsoft Desktop Optimization Pack (MDOP): Implementation that is a whisker too long?Microsoft has launched this ad campaign for its MDOP in France. I took a couple of blackberry photos (sorry for the quality) in the metro (tube) station at l’Etoile /Charles de Gaulle in Paris. The poster comes as a double header (so to speak), with the partner below.

I am hoping that there are a few of you out there thinking what on earth is a Desktop Optimization Pack for Software Assurance*. If I were not geeky enough to understand the English (this ad execution is for France), I certainly do not think I am geeky enough for the Cro-Magnon creative, either. I am assured by this infraops blog that there is “a lot of great stuff” in MDOP and that we will surely be hearing about this soon… And, if you are not sure whether MDOP is for you, you can find an ROI calculator for this pack here (ditii.com).

The question I have is what on earth are the advertisers thinking putting these B2B ads in the Etoile metro? Is it because of the large number of international travelers — which would explain why they left the top in English? Is it because the metro at l’Etoile goes to La Défense which is a mini-hi tech area in the Paris region? Maybe, there’s an inside joke that I fail to understand. In which case, I feel free roam to come up with my own take. Despite the French rugby team’s recent lacklustre performances, they are recruiting Sébastien Chabal, featured above in the UK rag newspaper, The Sun in October 2007, to warn the other Five Nations of France’s baby devouring forward. 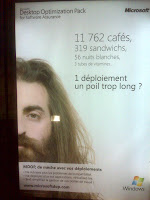 Don’t you think, in an air of collaborative marketing, that they might rather have hooked up with Starbucks (take it Philippe!), Subway sandwiches (that would seem like a shoo in given the context) and a European Lucky Vitamin or Vitamin Shoppe? Now THAT would have been news.

Between the recent Microsoft store idea, the Virtual Microsoft Windows Marketplace and this MDOP ad creative, I am beginning to have serious doubts about the Microsoft strategy. And, if they were looking for a geeky viral campaign for their MDOP, then surely the efforts should have been online — the presence of which I have failed to find after a quick googling.

Anyone think differently about this Microsoft endeavour? Do come and speak up!

—-
*Directly from the Microsoft site, here is their description: “Enterprise IT infrastructures are increasingly complex to manage. The Microsoft Desktop Optimization Pack for Software Assurance addresses the need to increase manageability and reduce complexity. It is a dynamic desktop solution, available to Software Assurance customers, that employs innovative technologies to increase desktop manageability, reduce the total cost of ownership, and improve overall infrastructure satisfaction.” And if you want to read on, there is an Official MDOP Blog (by the MDOP team).