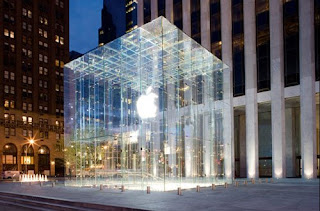 Listening to Apple’s videocast of the opening speech at this year’s MacWorld 2009, I heard that Apple stores around the world receive 3.4 million visitors per week.

Via a separate source, I see that Apple had 251 stores as of the end of calendar year 2008 (as reported here on CNET) and is planning to open another 25 this year (half outside the US), a slightly slower pace than the last few years.

As a benchmark for other retail stores, this means that, on average (which includes the slow time and the startups starting at different times of the year), there were 3.25 people per minute walking through the doors.

On a sell-through basis, the numbers are pretty potent. Apple said that they sold 9.7 mm Macintosh® computers in Fiscal 2008 — and of course, I do not know the mix between own stores, internet and other stores.  The company sold a record 22,727,000 iPods during the quarter ending December 2008 and 4,363,000 iPhones in the same quarterly period.

One thing is for sure, the genius that is on iTunes is also in their stores.  The harmony on a visual level and the service on a human level has raised the game of the retail experience.  I would love to know the conversion rate (consumers walking through the door who actually purchase); but, whatever it is, I am sure that there is an element of pride and satisfaction for each person that does make an Apple purchase, making them all the more pride to be able to flash their apple logo-ized bag.  Now that is MARQUE-ting.