It took a little bit of exploration on dead.net and Rolling Stone to find out — substantially after the fact — that the [revised Grateful] Dead played for Obama in the Mid-Atlantic inaugural ball (20 Jan 2009). No one I know was in attendance or perhaps they might have told me. In any event, I saw a bit of the footage and it looked quite goofy. The Dead were accompanied by Warren Haynes (of the Allman Brothers / Gov’t Mule) and Jeff Chimenti (on keyboards). The Dead were square pegged into a rather unorthodox one-hour gig, replete with security checks (that must have been a gas). On TheOtherOnes.net (and Dead.net) you can find this rather fun, behind the scenes video of the Dead preparing and play at this Inaugural Ball (the embedded script did not work for me, otherwise, you would be able to click on here!).

For your viewing pleasure, here is a YouTube amateur shot of the tail end of The Wheel into Touch of Grey (4 minutes) at that Inaugural Ball:

And here is a close up of Bobby Weir strutting his stuff. 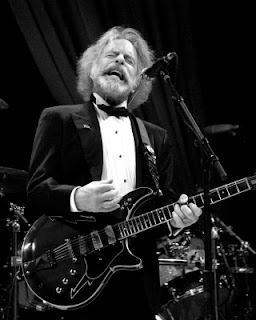 Updated March 21st.
The unofficial set list of the show (courtesy of rundangerously) went as follows:

The Wheel
Touch of Grey
Box of Rain