The culinary experience of Marrakesh and environs 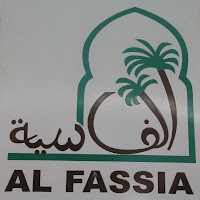 We had to miss out on the famed Hotel Mamounia because it is [still] under refurbishment. We splurged on two “exclusive” dinners, one at the Jardins de la Medina, 21 Derb Chtoukah, Kasbah Marrakesh) which featured excruciatingly slow service and a waiter that told us that had we wanted a dressing for our salad, we should have spoken up at the beginning. That said, the cadre, inside this deluxe hotel, is attractive. The other “prime” address we visited was Al Fassia in Guéliz (“new” Marrakesh) where we had to reserve two days in advance to get a table. Owned and run by some Moroccan women, Al Fassia (+212 5 24 43 40 60) was well worth it; we gave it top marks for its service and décor and we particularly enjoyed the “pastilla de pigeon” (pigeon patty).

For more local fare in Marrakesh, we had a delightful Tajine at la Gourmandise (151 rue Mohamed el Beqal), also in Guéliz as well as tasted some fine local pâtisseries (Adamo, 44 bis rue Tariq Ibn Ziad, and Al Jawda, 11 rue de la Liberté). If there is one thing I learned here is that Moroccans don’t do good chocolate.

The other eating Marrakesh experience is of course at night in the Jamaâ El Fna square (pictured below). Once you get over the heckling, you can find a jolly good meal. Best advice: find the one where the majority of clients are Moroccan. 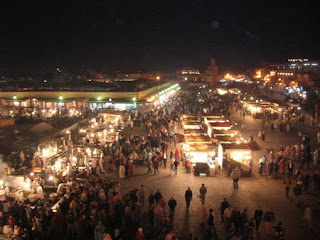 For lunch on our trip through the Ourika valley, south of Marrakesh and a Berber heartland, we aimed to eat at a well-regarded spot recommended by the Guide du Routard; but, apparently, there have been too many Marrakeshis (and tourists) visiting this establishment, so the owner left to seek refuge and rest at a nearby 4* hotel. Clearly, the crisis has not dropped the shoe down here. Our attempt to go to nearby Dar Piano was thwarted as it too was closed, so we hit a lively, open air spot overlooking the river, in the buzzing town of Oulmès. Being the only non-Moroccans, we were the entertainment for the Moroccan patrons of the restaurant. We enjoyed in turn watching nervous Moroccan women wobble across a shaky wooden bridge. As with virtually all local meals, you can have a full family meal (for four) for around 150 dirhams or 15 euros ($20). Tajine (or couscous) is sold for between 7 and 35 dirhams (70 cents to 3.50 euros) depending on where you are. If the prices are not printed, you may end up paying at the higher end of the scale, but for a maximum 3.50 euros, a tasty tajine is still a great deal. In this particular restaurant in Oulmès, we got to learn that people still use the old rials to calculate prices (much like the old French franc). For the record, you need to divide by 20 to get from rials to dirhams.

We took the children to Terres d’Amanar (on the route to Asni, near Tahanaout, about an hour due south of Marrakesh) on the one dismally rainy day of our holidays. The Terres d’Amanar is a large natural reserve featuring a resort hotel and a number of rough and tumble activities such as all-terrain bicycling, tree climbing, hiking, etc. We had made a reservation, but upon arriving, found no one at the welcome desk. Apparently, they didn’t expect us to make it through the drizzle. The kids played for twenty minutes on the wet slides, etc., before returning to the car satisfied for having invested an hour of driving time to get to the destination. The kids’ park is rather small. This is more for people (especially adults) wanting to do a full day of outdoor activities. It looked nice enough, other than the rain!

Another day trip was out on the much less frequented eastern route toward the oasis town of Ouarzazate. We stopped off en route at Aït Ourir where we were fortunate enough to hit the weekly (Tuesdays only) souk. Unplagued by tourists, the vendors were decidedly less pushy and cloying. We profited by picking up some local fruit (tomatoes, chickpeas) as well as a local [crushable] hat for 10 dirhams. We ate a savoury lamb tajine at a local pitstop for the whopping price of 40 dirhams. The route to Taferiate provided for a few pittoresque moments, but beyond, the road disintegrated in quality.

When you want to eat at the local restaurants, the key is to check the food before sitting down. That means asking to take the lids of the clay pots to make sure that the food looks fresh and smells good. Generally speaking, on food, there is not the same threat of having to negotiate. That doesn’t mean that you won’t necessarily get a little tourist taxation, but prices are often printed.