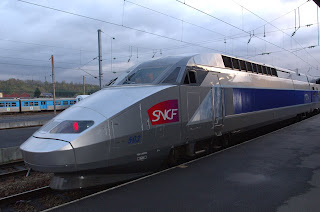 There are plenty of surprising deficiencies in the US, it being the number 1 world power (still).  I have  written previously about the poor state of education (at the high school level) in the US and the insufficient medical coverage (despite the disproportionately high percentage of GDP spent on health care).  There is, of course, also the fact that the US energy policy is overly reliant on oil and carbon (for its electricity).  But, it is also true that, while the US road infrastructure is quite exceptional according to world standards, the US train infrastructure is quite the embarrassment, trailing way behind that of countries such as Japan (Shinkansen, pictured below left), France (TGV, pictured right above), Germany (ICE), Spain (AVE), and even South Korea and China.   US trains, many of which travel over long distances, basically trundle along today at speeds of 125 kmh (78 mph).  Only five trains in the States average more than 127 kmh (79 mph).  Even the fastest trains in the US only reach 132 kmh.  Fairly desperate, even if speed limits on the road are also remarkably low, too.

What I like about this initiative laid out by Obama this week is that it contains both economic and social sense.  Investing some paltry $8 billion of the $787 billion bailout, the notion of improving the US rail system to have trains hurtling down parallel lines at average speeds of well over 300 kilometres an hour (186 mph) is good (nay fantastic) for improved efficiency and reduced carbon emissions.  At the same time it is a good way to occupy (hire & train) American workers.  Unplugging traffic jams is just one part of the story.  Faster travel (from point A to point B) and, more importantly, an ability to work constructively while riding on the train must be no small addition to increased productivity.  And, as if I needed another argument, the bullet trains are certainly a lot more interesting to look at from a design angle.   These high-speed trains are just a lot sexier looking than the clunky, stub-nosed Amtrak or even Metroliner trains.   Here is the story as covered by USA Today (April 16). 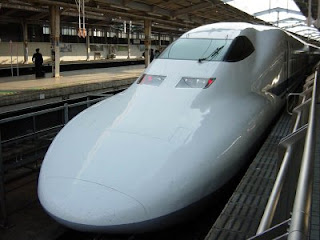 There are many hurdles to making the fast train project succeed: the continuing affection for cars, the poor service record of train service (Amtrak, for example, is quite poorly regarded), the fact that all the tracks would need not only to be widened but also straightened…  All the same, the project is the right one, for all the right reasons.  As long as the unions do not get a stranglehold on the jobs (and becoming a train driver does not mean being able to retire at the age of 52 as is in the case currently in France).  That means, also, that the system will need to figure out how to run on time, without exorbitant cost.  The team evaluating the train system of the future for the US would be well advised to learn from the SNCF on how to run a CRM and fidelity program, too.  The last component of success (and lesson learned from the Japanese) will be the courtesy of passengers not to use their cell phones indiscriminately (and rudely) in the face of the surrounding passengers.

My only concern will be to see how effectively Government manages its funds.   Otherwise, I enthusiastically press on the “green” button.

All those in favour, say “ay”!  If not, give me your counter arguments.