The Economist ran a special report (March 14, 2009) on Entrepreneurialism and there were several interesting and important points that I felt like writing about. The 16-page report discusses the state of entrepreneurship around the world. In some regards, the report contains an apologia for European entrepreneurship, at least as it pertains to the non-Anglo-Saxon countries. Denmark is cited as a standout example in many regards, and most of the Scandinavian countries, as well as Britain, have a good record in the promotion of and opportunity for start-ups. The United States generally retains its leader status for entrepreneurship and one of the articles, “The United States of Entrepreneurs” describes a number of reasons why the US has managed to continue its run of entrepreneurial successes.

The one reason that really caught my fancy was the power of the story. The notion is that, all throughout high school and university, American-educated children hear stories of inventors and entrepreneurs such as Benjamin Franklin, Thomas Edison, Henry Ford and Steve Jobs, etc. How on earth one can substantiate the positive benefit, I have no idea. However, the underlying concept is that icons and role models have no uncertain power and stories, etched into the young, moldable minds, have a habit of being converted into dreamed up business plans.

The article describes the usual suspects of freedom to hire and fire and access to venture capital. [If the notion of investing in a start up is considered a venture in the US, it is called capital risk in numerous European countries].

Another surprising point, as far as I was concerned, is the link with Academia. According to the Economist article, another advantage in the US “is a tradition of close relations between universities and industry. America’s universities are economic engines rather than ivory towers, with proliferating science parks, technology offices, business incubators and venture funds…” That the content and instruction in the “MBA” schools, borne out of the US, provides best-in-class business-training is probably unassailable. But, I would not have known about the comparative strength of the link between academia and business, as I am unaware of the strength of the link in other systems.

The final point I would like to highlight is the U.S. “immigration policy that, historically, has been fairly open.” A professor of Duke University, Vivek Wadhwa, is quoted as saying that “52% of Silicon Valley start-ups were founded by immigrants…” What is not said, but which I firmly believe, is that the reputation of America – all that is incarnated in the American Dream – attracts the entrepreneurially spirited immigrants. Immigrants who, at least in theory, have the choice of which country to which they will attempt to emigrate, will not select the USA if they are fearful of failure, if they are looking for protection and care for [a large number of] children. The reputation of you can “make it rich” in the US is inevitably accompanied by the knowledge of the lack of a safety net. In short, I maintain that the US has a habit of receiving applications from immigrants wishing to create and produce.

The final piece that is fascinating to observe is the propensity for start-ups in the US, not only to survive longer, but more emphatically to scale quicker. Witness the number of companies in the top 100 (based on market cap) that did not exist twenty years ago (Google, Ebay, Yahoo, Amazon…, but the list is not just limited to internet stories). The chart below is particularly telling, measuring the net number of people hired by surviving, new companies. (Source OECD) 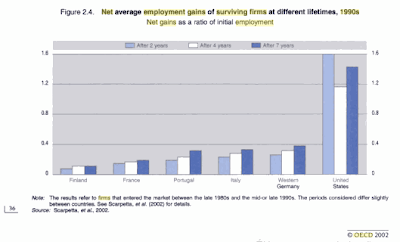 If you want to have some fun, look at this complete list of the world’s countries ranked according to the ease of doing business (source: the World Bank Doing Business database). There is no single column on mafia or corruption levels, per se, but the different categories are broad and quite fun to explore: getting construction permits, trading across border, enforcing contracts… Topping the listing is Singapore, followed by New Zealand and USA (with no changes in the top 8 from 2008). Among European countries, Italy comes in at an appalling 61st, while France is 31st (2 ahead of Azerbaijan) and Greece is 96th. Russia (120) and Ukraine (145) are at the “deep” end of the table. Below is the top 20, ranked according to ease of doing business (2009). 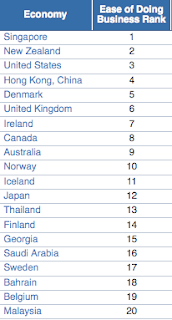 A parting remark: The word entrepreneur is a distinctly French word, n’est-ce pas? But, somehow may have been lost in the [bureaucratic paper] shuffle, if not translation.