Have you heard of Google Image Labeler (GIL)? The Google explanation says that the service is still “new”, although according to the Wikipedia entry on GIL, the service was put into beta mode in August 2006. 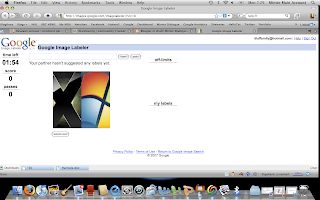 Google Image Labeler is designed to make the labeling of all the images found on the web a group effort via a fun little game. The originality of the game is that it uses teamwork. It is also done in 90 second bursts. You work with an unknown other internaut who has signed up and you try to figure out together words that could or should be associated with the image simultaneously put up on the screens of both users. You also have the option of passing (but you need your partner to give up as well in order to move along to the next image). Certain words have already been found and validated and these are considered out of bounds. At the end of the 1’30 game, you and your partner are given a score based on the matched words. If you are, at that point, really competitive, you can keep on going and rack up more points for GIL fame.

I think this is a great way to give photos context and to improve search accuracy. Of course, this means more user participation. Google will need to get the word out more that this game exists. Aside from the competitive notion and the feel-good factor of helping the internet get contextually better linking, you as the player don’t learn anything from GIL, so it’s a short-lived game, at least for me.