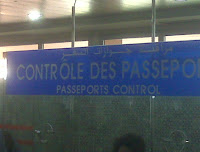 At the airport of Marrakesh, Morocco, as we were leaving, I snapped this photograph (above) of the “official” sortie. The Passport Control desk has a sign above it in three languages. The French is given prime real estate. I trust the Arabic is spelt correctly. Meanwhile, the person who approved the English needs to revisit his or her spelling (yes, one ‘e’ too many). And, for that matter, one ‘s’ too many as well. I failed to find a “Suggestions & Complaints” box, so had to resort to the blog.

I do wonder how much the world could be a better place if there were open channels of communication for accepting people’s voluntary comments, etc. Aside from figuring out the logistics, one of the problems would be: how many of the suggestions would be right and/or appropriate (cf Wikipedia)? A government 2.0 site for fixing ‘errors’? It could speak volumes for a co-creative relationship between citizen and state?

Do you think life would be better if people had the opportunity to write to the government every time they had a constructive criticism?