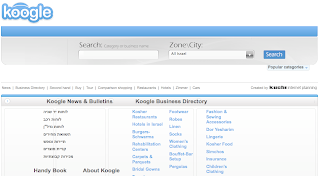 This post is being published today, Wednesday, a day other than Saturday, on purpose. It is about yet another new search engine… In the wake of Wolfram Alpha and Bing, announcing Koogle (www.koogle.co.il), a cross between Google and Kugel (the name of a Jewish noodle pudding), designed for the Jewish (read Haredim) community. Ok, Koogle is not going to be bringing you revolutionary and sophisticated responses for the everyday Joe. In fact, Koogle doesn’t come up on either Bing or Wolfram Alpha. Evidently, the owners of Koogle.co.il were not able to grab the koogle.com URL either. Koogle is not for everyone and it is not for every day use on the Internet. In true Kosher form, Koogle crashes on Saturday (starting at sundown on Friday and ending 25 hours later). To read “About Koogle,” apparently you need to read Hebrew.

In their mission statement, Koogle administrators said the site’s goal is to “filter the appropriate information from different websites that are relevant to our target audience in a way that does not contradict the values of our traditional Jewish audience.”

From the USA Today article on 18 June 2009: “Koogle is not a filter for surfers who want to access secular websites. Rather, it is a compilation of Israeli resources deemed inoffensive by the administrators. It includes news, business directories and links to realtors, kosher restaurants, hotels as well as mohels, or ritual circumcisers, and rehab centers.”

And, again from the same news source: “In keeping with the norms of the haredi community, no photos of women — no matter how modestly attired — are permitted on Koogle. Nor are there ads for TVs, DVD players or other “unkosher” products.”

Well, it may not rank up there with Wolfram or Bing in terms of traffic, but it certainly is the winner for being the most specific.

UPDATE ON 14 APRIL 2011: The site Koogle is no longer functional