Driving in Italy is quite an experience for most of us non-Italians.  However, driving in the south of Italy is considerably worse, in my opinion, than driving in the north of Italy (cut off at Rome).  Even if I consider myself a handy driver and get by in Italian (più o meno), I was still rather confused by the signposts.  I snapped this shot in Salerno, on the coast south of Naples.  Anyone’s guess as to what it means!? 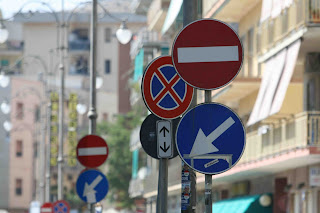 You can find similar paradoxical signposts all along the middle of roads.  Rather unnerving.

Of course, there are also the southern Italian driving habits.  On dual-lane carriageways, there are, naturally, two lanes.  You might say, the ordinary lane and the overtaking lane?  The Napolitans have repurposed the lanes.  The super slow lane (less than 60 kmh) for the panic-stricken and the super fast lane where the drivers, often in swank SUVs, speed up to your tail at over 150 kmh, ominously flashing their beams to get you out of the way, to move into the docile slow lane.  Again, rather unnerving.

Anyway, when I returned to Paris, I found that some of the driving ‘habits’ I had picked up (to survive) in Naples came with me.  The Parisians found me particularly rude.  After a short while, however, I was able to curtail my Napolitan style driving and avoided any Parisian tickets.  Anyway, if you plan to do any driving in southern Italy, get your lead shoes on!