In a democratic sense, the Government is the representation of the people.  As such, you might expect the notion of “fair” representation to be more heralded by the latest Sarkozy government, ushered in the last week of June 2009.  The new cabinet, under the loyal PM François Fillon, announced on June 25, covering the 38 ministries, contains 8 new people and the mélange is rather interesting.  If it is still not fully representative from a socio-demographic standpoint, the latest Sarkozy cabinet covers a wide spectrum of races, age, sex and ideology. 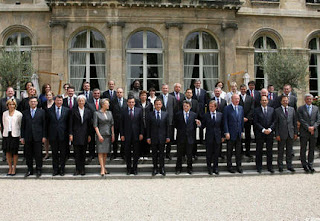 There are a handful of “French liberals” aka capitalists or just “conservatives” (P Lellouche, H de Raincourt, H Novelli, D Bussereau, H Falco), another handful of centrists (H Morin, M Mercier, V Létard, C Blanc & AM Idrac) and yet another handful that could be said to sway more toward the “left” (Hirsch, Kouchner, Eric Besson, Frédéric Mitterrand et JM Bockel).

There are 4 ministers that represent “diversity” and all four are women.  Insofar as France, following in Norway’s footsteps, has imposed a quota of 40% of women on executive and advisory boards (of state and publicly traded companies) by 2015 (20% by 2011), this Sarkozy government is well on track, if perhaps a little light among the full portfolio ministers.

I was particularly interested by the preliminary words used by President Sarkozy to his assembled team (I transliterate): “ Don’t speak too quickly to the journalists, until you have a good grasp of your subject.  Show solidarity with your fellow cabinet ministers, don’t transgress on each other’s territory (aka don’t step on each other’s toes), and don’t forget that you are NOT in your position just to recycle dossiers that have been prepared for you by your administration.”  (note the double negative).

In these lines, one can read many things.  Communication is absolutely key to success.   Be master of your destiny by gaining knowledge (and I might have added more field work).  And, providing Sarkozy defines carefully enough the said territories, then it will be possible not to interfere with one another’s work.  That said, with such a diverse population in his cabinet, one could also expect to have diverse interpretations.  And that is the benefit and the difficulty of diversity.  Let us see how Sarkozy and PM François Fillon manage.