Lech Walesa, ex-President of Poland and Nobel Peace Prize Winner, gave a resounding speech at the MEDEF Universite d’Ete 2009. Walesa retraced the history behind the Solidarnosc movement he led in Poland and then presented his case for progressing the European cause. Here are a few sound bytes (translated from the Polish into French and again into English by me). 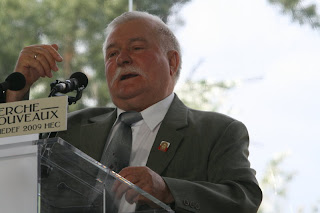 Walesa spoke about the extraordinarily peaceful times we live in, saying that “no generation has ever had as great a period of peace and we have a great chance to make a unified Europe, without the use of force.”
–Commentary: Of course, the ‘peaceful era’ doesn’t necessarily seem to be the case for the Americans.

He continued by asking whether today’s generation will be capable of taking advantage of this worldwide truce? Walesa called for more action to create a unified Europe. “I believe that this generation, via democratic debate, will understand what is missing… what is needed…”

“If the individual’s wishes continue to be privileged, we cannot do much … we will continue to have the crises…. such as the economic crisis we are experiencing today” — meaning that there needs to be more solidarity…

“I am just a revolutionary, and I don’t have all the answers…” including to the question “what economy, what economic system is needed for a unified Europe?” A second question: “Which Democracy, which liberty [for Europe]?”

I enjoyed his speech and his passion. I also believe that the questions he raised for Europe and the clear risks that are poised in not unifying Europe are indeed critical for today’s generation. Of course, on a few other points, I considered his thoughts unlikely to gain traction (especially that the way to avoid all crises lies in finding solutions to create general solidarity…). Nonetheless, if he’s not the most appreciated person in Poland, he certainly gathered a few [more] fans in France with this speech.