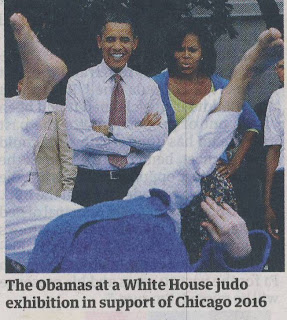 This photograph from the UK’s Guardian newspaper (17 Sept 2009) caught my attention initially for the curious position, in the foreground, of the unfortunate person on the receiving end of a flip in a judo exhibition. Then I zeroed in on President Obama and Michelle Obama’s expressions, framed between the outstretched legs.

The photo is a jewel for those of us observing the difference between the archetypal feminine and masculine reaction to an event. You have Obama’s smile juxtaposed against his wife’s aghast expression. On the one hand, you have a man appreciating the athletic effort of the ‘victor,’ while, on the other, the woman is feeling the effects of the loser landing on his head. Is it V for Victory or V for Very Painful? In either case, watching sports brings out our emotions and, per this photo at least, the experience is very different according to your point of view (and I’m not just talking the team you support).

Do you have another view on this photo? And how different is the experience for men and women (or the masculine and feminine viewpoint) when observing the same sporting event?