Have you ever struggled to keep your hard cheese fresh? Then, here is the answer, and it comes with proof.

We did an experiment whereby we cut a wheel of Cornish Yarg (a delightful cow cheese that is wrapped in nettles) into two slices. We wrapped one slice in a cloth and put it in the fridge which was our usual way, up until now. A week later, the cheese looked as such (photo 1 below). You can see that is cracked from being too dry, although it remained as yet edible. 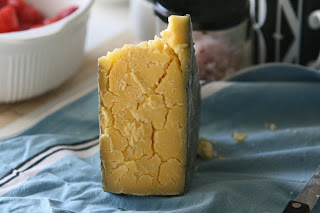 Photo 1. Cornish Yarg after a week in the fridge wrapped in blue cloth

The second slice, we put the cheese in a tupperware with a couple of cubes of sugar. This advice was given to us by the cheesemonger, Maitre de Comte, Gabriel at La Fromagerie on Moxon Street, London. And it absolutely works. You can see in Photo 2 the second slice, cut and stored at the same time as the slice in photo 1. Fresh as a daisy after a week! Not only that, but as of the writing of this post, the cheese is still as fresh three weeks on (although you have to add more cubes and occasionally rinse out the tupperware). 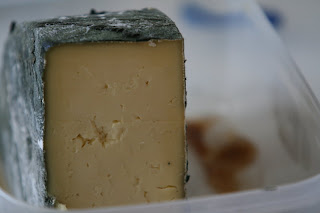 Photo 2. Cornish Yarg a week later after being in a tupperware with sugar

The question is how does it work? Unfortunately, I am not exactly sure, but I thought I would provide a photo of the sugar cubes to find the clue. The cubes (white sugar in this case) dissolved and turned brown. One can assume that the sugar absorbs something (humidity?) which might otherwise render the cheese dry (how does humidity dry a cheese is a trick question, no?). Yendi’s hypothesis: the tupperware retains too much humidity (from the cheese) which is carefully extracted by the sugar! 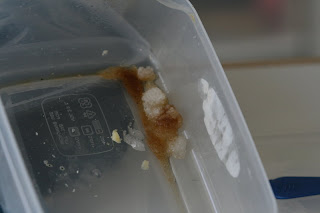 Whatever the process, the trick works. So, go ahead and put your sugar cubes to good use (rather than in your coffee or tea!) and, henceforth, place a couple in with your hard cheeses in a tupperware.

Drop in your comments if you try this and/or have any other food tips!