“Will capitalism become ethical or not?”
Plenary Session animated by Jean-Pierre Elkabach

Below I will highlight a few points that I took away from the two hour plenary session, brilliantly managed by JP Elkabach, on Ethical Capitalism at the MEDEF Summer University 2009.

As with the other subjects discussed in all the sessions at the Medef UE 2009, the US clearly remains a nevralgic centre for business leaders in France. To be sure, I was not the only American in the audience to be fingered. The newly assigned US Ambassador to France, Charles Rivkin, was on hand to hear a number of rather broad criticisms of the US in the current crisis. Not too surprisingly, a large part of the ‘debate’ was focused on America, the originator of today’s world crisis.

With a few broad strokes, Pierre Bellon, President of Sodexho, ranted (since he feels he has earned the right), “the fault [of the current crisis] lies with bankers…credit agencies…and politicians…” As if that were not enough, he also felt the need to state that “the citizen and the small companies cannot be held responsible.” Mr Bellon called for, among other things, greater transparency, the cleaning up of conflicting interests, and the end of the eternal optimisation of corporate profits… What irked me about his tirade was the feeling that there was little accountability in his words There were no corresponding concessions understood in the propositions and there was no ripost from the stage or floor…

Laurent Fabius, former PM of France, explained that the US will have to rebalance its budget. ‘It is an enormous “black cloud” that looms over the world’ said Fabius about the US budget deficit. Regarding France and the system of ‘privileges‘ (defined as that which is “read in private“), Fabius suggested that the MEDEF should review that which should be allowed to be transparent as he believes that the trend toward total transparency is dangerous. Fabius grandly called for a Social and Ecological Economy, whatever that means. 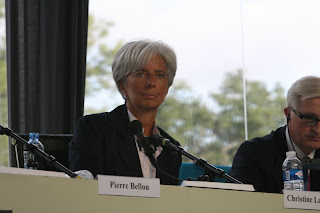 Christine Lagarde, France’s Minister of Economic Affairs, also did not like too much transparency either. However, in a play on words, if not shadows, she prefers to shed “light”… shone on the shadier, darker areas, including the Swiss banking traditions (2/3 of the world’s transactions occur in the ignorance of, or outside the realm of the world’s governing agencies). However, unfortunately, she did not have the opportunity to elaborate on which transparency she did not want to have…

What struck me about the intervention of the three people I cite above was the recurring issue of transparency. To be transparent or not to be… and about what? This was certainly a topic that came up again and again in the various sessions. In certain regards, on an emotional level, total transparency is an unlikely objective, even dangerous. In any event, is there such a thing as total truth? Unlikely. The issue of total transparency is that one may risk removing all the mystery of life (as one might appreciate in surprises, love and luxury … ). Secondly, there are certainly some things better left unsaid in terms of avoiding unnecessary heartache…e.g. white lies. Whether personal or political, some secrets are better kept that way. But, how and when to know to stop the transparency tap? Aside from state secrets, there is the case of some ‘sensitive’ subjects being put into the wrong hands (notably the media), and these do indeed need to be treated with great care. But, shrouding facts behind the veil of secrecy is a tricky business. And, for the cynical, if everything is transparent, there is no more wiggle room for propaganda?

Nonetheless, notwithstanding the philosophical nature of total disclosure (cf Rousseau’s Confessions), I truly believe that, in the field of business, there is a need for much greater transparency and I would be worried to believe that Mme Lagarde would not agree. Transparency is, in this case, an issue of strategic communication. This does not mean that one need be saying everything about every subject; too much information is one of today’s major curses. Yet, there is much to gain in terms of employee ‘buy-in’ by being transparent about a corporation’s its financials, challenges and ambitions. Such transparency helps galvanize what is sometimes termed as ‘psychic ownership‘ whereby, without needing recourse to stock options, an employee comes to ‘own’ the vision and the problems and, along the way, becomes part of the solutions, too. Even in the case of brands and their relationship with the customer, transparency is more desirable. The myth of “mystique = value added” has worn thin. The brands need to regain the [lost] trust of the customer which is why there is so much being attention paid to authenticity and transparency. Surely, it is not too strong a leap to suggest ethical capitalism should include transparent values and justifiable value? Would be glad to have your feedback on this topic!

I finish with what, for me, was one of the more poignant phrases of the conference. Philippe Lemoine, President of LaSer said, “[t]he French need to have confidence in themselves…” He encouraged the MEDEF business leaders: “You need to listen better…” and you will find your way better.