I attended a GEF (Grandes Ecoles au Feminin [1]) conference yesterday, here in Paris, at which I listened to the results of an Ipsos study entitled, “How to improve the mix of women in management [in France].” You can read the French results here. This was the fourth time that a study had been commissioned in and around this topic, and apparently the results remained largely similar: all manner of managers in business recognize that having women in management is a good thing, but that little progress has been made and the road ahead is still long.

The study was made with individual interviews of top management from 16 major French companies (Dec 2009) as well as the answers of 5,431 respondents (questionnaire was self-administered on Internet) in May 2009.

Some highlights that I picked out:

In a review of actions taken by companies to promote women in management, the study identified 25 measures that had been concretely taken by one or more of the 16 companies interviewed. The irony of the study was that 16 of the 25 measures were considered en masse to be easy to implement and effective in their results. And, yet, the net results remain basically imperceptible. The GEF team concluded that the reason for the lack of impact is that companies are satisfied to implement only a couple of the measures which, in practice, did not bear any fruit. Fully 1/4 of the respondents (21% for men and 29% for women) believed that it will take 50 years before seeing parity in France. 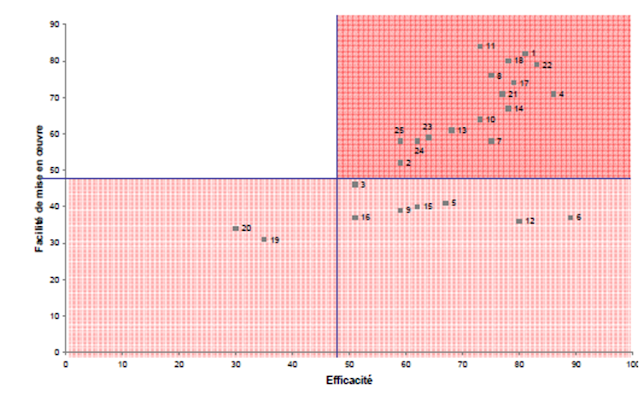 The net result of this GEF survey is a sort of manifesto of 10 specific measures that need to be taken, ensemble, in an effort to make real headway on this issue. I cite those 10 actions below, adding a few comments where I see fit.

GEF Plan: A Plan of Action in three areas, that needs to sponsored by top management

Operating and monitoring of measures implemented

As for quotas (as in Norway for Executive Boards), the GEF position is: there is no proof that we can do without quotas. They asked their pool of respondents the question to what extent they were opposed to a quota system. The “good” news was that they were less opposed than expected. However, that still left 45% — 56% of men and 32% of women — opposed (somewhat or totally) to a quota.

And, finally, I leave you with an article on a study which I have found extremely enlightening regarding how men and women can operate differently. The Harvard Business Working Knowledge article by Martha Legace interview of Professor Boris Groysberg (Harvard Business School) is entitled, “How female stars succeed in new jobs.” The article (and study of 1,000 analysts) presents how female analysts (Wall Street) do a better job of creating a successful transition to a new company. As Groysberg said in an HBR article in Feb 2009, “[f]emale star analysts, it would seem, take their work environment more seriously yet rely on it less than male stars do. They look for a firm that will allow them to keep building their successful franchises their own way.”

North America if far from perfect in terms of parity, but there are surely some good examples to be had from over the pond.

(2) Using the term “mixity” is perhaps a bit of a frenchism, but the important point is relating the percentage of women in top management positions compared to the overall employee population of that company. For example, it is highly irregular and suspect to see a company with 10% women on a board of directors in a company where over 60% of the employees are women.