I had my first ‘motorcycle taxi’ ride last Friday. It turned out to be a classic experience of getting to the airport JIT (just in time). My flight was at 4:15pm and I left my meeting at the MEDA headquarters at 2:30pm. According to the driver, we would arrive within 25 minutes, no sweat. 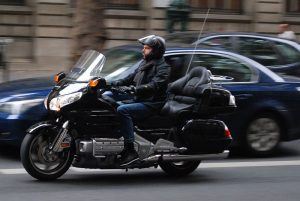 My first thought about the Motorcycle-taxi regards the very different experience of getting “into” the motorcycle taxi, this being my first such taxi ride. The first point is that my driver, David, felt the need to shake my hand. A personal touch. The next challenge was the suitcase which was apparently much bigger than expected. However, after some stretching of the veritably industrial elastic bands, the suitcase was cabled on to the back of the bike. Then, with hairnet to boot, I slipped on the second helmet. The final ritual involved the alcoholic gel for the hands before putting on the provided gloves. Only fitting, I thought, before you split your legs and sit behind a total stranger. All aboard, we went off with a relaxed feeling – I was, indeed, very confident that we would make it in time. So confident, in fact, that I decided to make a quick stopover at my home – basically on the way to the Roissy (CDG) airport, some 30 kilometres north of Paris.

Having arrived at our home, I scrambled up and down and was back on the saddle at 2:45pm. A little tight, but we should get to the airport at 3:10pm at the latest assured David, my friendly driver. As it turned out, as we arrived at the first entrance to the péripherique (Paris’ ring road), we found the on-ramp blocked off, causing general mass confusion of honking, a lot of frustrated drivers and a quite unexpected traffic jam. We diverted to the next entrance, not without jumping a few curbs. Same problem. The entrance was again blocked. By the time we arrived at the third entrance, my heart had taken on a noticeably less consistent beat. We asked the policeman, who was nonchalantly shooing us off the on-ramp, how many of the entrances might be closed off. “Presidential Procession” was the surly explanation, accompanied by a shrug of the shoulders.

After the fourth ‘diversion,’ we wiggled and ziggled and finally found a route onto the A1 toward the airport via St Denis. At last, we experienced some free sailing. We arrived at terminal 2A at 3:18pm. Pretty good, I thought, but later than I would have wanted and less than an hour before the international flight was to take off. Catastrophe struck as I found out that the right terminal was actually 2E. Fortunately for me, David was still re-arranging his bike for his next trip. Putting the helmet back on, without hairnet this time, and jamming the suitcase between us, we zipped over to the E terminal, which, if you don’t know CDG, is a good kilometre away. Imagine my horror, when I discovered that the real right terminal was 2F, some 500 metres away by foot. The sprint was on. I arrived at the check-in counter to hear “sorry, sir, the flight is closed for check-in.” To my good fortune – and thanks to the electronic new age – I had pre-checked in and had a boarding pass. The woman accepted my situation (and my C2000 card) and I was able to go through the final formalities to board the plane. Hurray.

Anyway, the motorcycle taxi definitely saved me… I cannot imagine what might have happened had I been in a classic car taxi. It was worth it all the way. Anyone else want to share a Moto-Taxi experience? Zip on over here and tell us.