As reported by ZDNET and BBC News “Apple offers free iPhone 4 cases,” Steve Jobs has shown himself and the company to have flaws.  I am a total and avowed Apple convert, but I am of the variety that never rushes out to buy the very first model (a late early adopter?). I have found that the risk/reward of being a front runner is just not worth it. Inevitably, the first model is “nice to have,” but the functionality is systematically a little imperfect and, for me, below expectation in certain basic elements.  Here are some examples of v1 flaws that I deemed I could live without…

I will give Apple all the necessary credit for their innovation, category invention and masterful marketing.  And, I acknowledge and marvel at Steve Jobs’ obsession for simply beautiful design.  AND, I still believe that it does not pay to buy the first model.

That said, the Apple afficionados clearly have a good tolerance level for these imperfections and, in the community spirit, participate happily in the improvement suggestions for the follow-on version.  Apple’s ability to hold off and only do a second version once they have improved as far as they can (including adjusting pricing, etc.) is quite remarkable considering the amount of negative flack they receive.  But, as a LOVEMARK (3548 love it, 373 lose it as of today), they continue to host a vibrant conversation with their loyal fans and the company has kept going from strength to strength.

The iPhone 4 is potentially a turning point, however.  The competition on the phone / portable music player / camera is at least catching up… Meanwhile, Jobs’ off-hand, hands-off type of comment about the latest antenna problem is perhaps a bit symptomatic of a backhanded slap — almost as bad as BP’s CEO, Tony Hayward, saying that he wanted his life back.  And, in his appearance announcing the “case” patch,  you see Jobs comparing itself to other phones…. clearly a recognition of mortality. 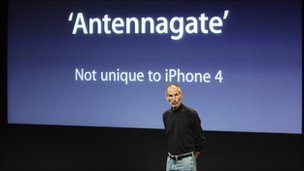 To even think that this could be compared to a Watergate type plot against Apple is a little scandalous.  ”There is no Antennagate,” claimed Jobs.  But who set whom up?  The conspiracy seems more linked to the shrouded internal politics of Apple.  Moreover, the problem is that one expects more of Apple… and, therefore, I believe that the “lucky” people who were able to get their hands on the early run of the iPhone 4 are right to be demanding.  The errors (read imperfections) that have accompanied this Apple 4 launch are manifold.

Apple’s shine is still great and their stock price performance has been nothing shy of perfect (total disclosure, I own some Apple stock).  I can’t wait to get a newer version of the iPad.  But, clearly, the Apple has a little bug (aka a worm) that might be a little hard to shake off.  The wiggle room may just be getting smaller for upcoming launches.  And let’s keep an eye out for how the lovemark starts just getting some mere like-marks or, worse yet, lose-marks — that would mean a real bite taken out of the apple.